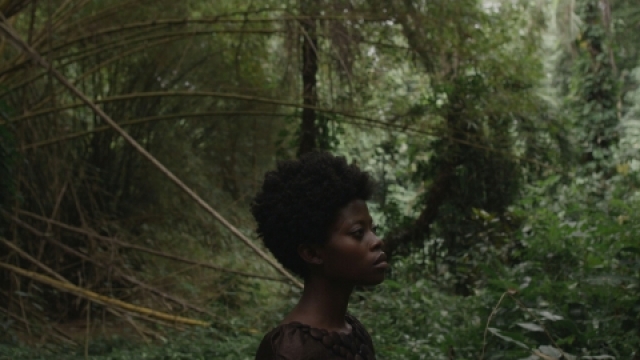 Akosua Adoma Owusu presents a retrospective of her work at REDCAT on Monday, May 6. | Image from REDCAT.

On Monday, May 6, she presents Between Three Worlds: Films by Akosua Adoma Owusu, a retrospective at REDCAT in downtown Los Angeles. The program features her most recent film, Pelourinho: They Don’t Really Care About Us (2019), as well as a wide selection of earlier work such as Me Broni Ba (2009), Owusu’s CalArts award-winning thesis film.

Ghanaian-American Akosua Adoma Owusu is one of the most distinctive independent filmmakers to have emerged during the past decade. Her work explores collisions and contradictions that result from embodying multiple consciousnesses. For Owusu, feminism, queerness and African identities intersect with African, white American, and black American cultures. Her style ranges broadly, from reenactments of folk tales, media critiques, celebrations of black aesthetics and intimate portraits. Owusu’s work is imbued with a rich sense of form that brings each subject to vivid life.

On Thursday, May 9, Owusu’s solo exhibition Welcome to the Jungle opens at the CCA Wattis Institute in San Francisco. The show features a site-specific installation as well as the institutional debut of White Afro (2019) and Pelourinho, They Don’t Really Care About Us (2019). For the first time, she will also present the three films that comprise a “hair trilogy” (each focusing on an aspect of hair or hairstyles of African and African American women): White Afro, Split Ends, I feel Wonders and Me Broni Ba. Welcome to the Jungle runs through July 27.

Her California tour concludes with Triple Consciousness, a screening presented by the Yerba Buena Center for the Arts, on Saturday, May 11, at the SF Cinematheque. The filmmaker appears with Leila Weefur of local curatorial collective The Black Aesthetic to discuss her recent works including Mahogany Too (2018), On Monday of Last Week (2017) and Reluctantly Queer (2016).

Two Screenings and an Exhibition by Akosua Adoma Owusu