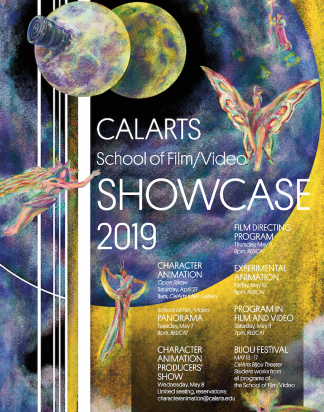 The annual CalArts School of Film/Video Showcase celebrates the culmination of student work from the past academic year, presenting a juried selection of special screenings from the School of Film/Video’s four programs: Character Animation, Experimental Animation, Film Directing and Program in Film/Video. Several of the screenings take place at REDCAT this week, and are free and open to the public (although reservations are required).

From the Film Directing program (Thursday, May 9, 8 pm):

From the Experimental Animation program (Friday, May 10, 8 pm):

From the Program in Film/Video program (Saturday, May 11, 7 pm):

The annual Character Animation Producers’ Show takes place on Wednesday, May 8, at a private theater in Beverly Hills. Due to limited seating, reservations are required for this event.

The School of Film/Video’s academic year ends with the annual Bijou Festival, running from May 13-17 in CalArts Bijou Theater, presenting works from all programs for the entire CalArts community.

Saturday, May 11, 7pm
Program in Film and Video
REDCAT