This year’s exhibition is titled, “May You Live in Interesting Times,” an expression purported to be a translation of a traditional Chinese curse and popularized in a 1966 Robert F. Kennedy speech. The expression, seemingly a blessing, is often used ironically with the implication that the “uninteresting” times throughout human history were peaceful, whereas those of note were chaotic and ridden with conflict.

Paolo Baratta, president of La Biennale di Venezia, stated that the title evokes both a sense of our tumultuous modern zeitgeist and an invitation to consider the complexity of human events in the context of conformism and fear. Artists, Baratta claimed, challenge us to look beyond these simplified paradigms. 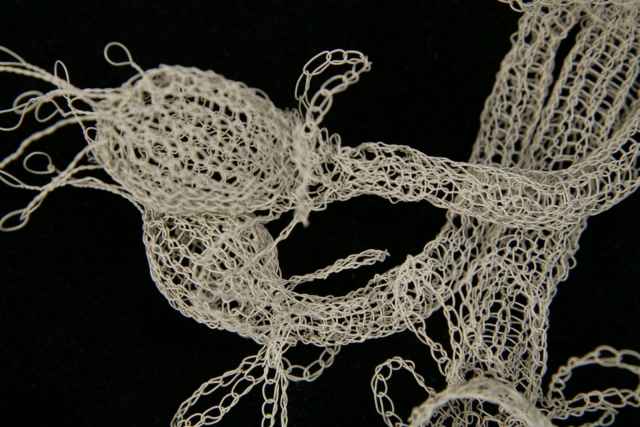 Wertheim unveils a new installation at La Biennale with her sister Margaret Wertheim. Their most recognizable work the Crochet Coral Reef. | Image: Courtesy of the Institute for Figuring

Wertheim unveils a new installation with her sister Margaret Wertheim. The pair are co-founders of The Institute for Figuring (IFF), a nonprofit organization “dedicated to the poetic and aesthetic dimensions of science, math and engineering,” according to their website. IFF has received grants from the Orphiflamme Foundation, the Andy Warhol Foundation and the Annenberg Foundation.

In 2015, they published Crochet Coral Reef, a culmination of the Wertheims’ project that began as crocheting coral forms with mathematician Dr. Daina Taimina’s “hyperbolic crochet” technique, and later progressed into large-scale installations by contributors around the world. The Wertheims won the Theo Westenberger Grant for Outstanding Female Artists from the Autry National Center in 2011, and the AxS Award for Contributions to Art and Science from the Pasadena Arts Council in 2016.

Cameron Jamie is a video and performance artist who works primarily in mixed media. His catalogue ushers performative gestures like dress-up, professional wrestling and even “dry humping of furniture” into mundane and often suburban scenes “imbued with artifice,” reported Hyperallergic. In 2017, three of Jamie’s short films—BB (1998-2000), Kranky Klaus (2002-03) and Massage the History (2007-09)—were on view at Gladstone Gallery in New York. Jamie was the recipient of the 2016 Drawing Prize of the Daniel & Florence Guerlain Contemporary Art Foundation, and has displayed his work in numerous group and solo exhibitions around the globe.

In an artist profile in Hyperallergic, L.A.-based painter Henry Taylor’s work is described as color-saturated, animated through broad brush strokes and evocative of an “emotional porosity.” His works serve as a magnifying glass into the lives of his various subjects—”black athletes, heroes, legends fallen from grace, and iconic victims of societal racism and hate”—often evidenced by characteristic symbols such as the subject’s clothing, accessories or props. In 2018, Taylor was awarded the Robert De Niro, Sr. Prize for his contributions to the painting sphere. His work has been shown in various group and solo exhibitions in the U.S. and abroad, including the 2017 Whitney Biennial, the 2012 Made in L.A. Biennial, and the 2013 Carnegie International.

Kaari Upson is a sculptor and installation artist. Much of her artistic career has been dedicated to The Larry Project, a series of pieces she began in 2005 during her studies at CalArts. The series was inspired by an abandoned house across the street from Upson’s childhood San Bernardino home that had caught fire. The property, then replete with homeowner Larry’s letters, legal files and other belongings, has since informed Upson’s artistic development. Upson’s interest in body and stain are evident in her work, often manifesting as domestic objects “in the last gasps of rigor mortis,” as noted in Upson’s profile with PIN–UP Magazine. Upson’s work resides in the public collections of various museums, including the Museum of Contemporary Art, Los Angeles (MOCA,LA), the Institute of Contemporary Art (ICA) and the Whitney Museum of American Art.

Established in 1895, La Biennale di Venezia has been heralded as one of the world’s premier international cultural festivals, boasting more than half a million visitors in recent years. The 58th International Art Exhibition, curated by renowned artistic director Ralph Rugoff, includes 79 artists from around the globe, as well as 91 national participants.