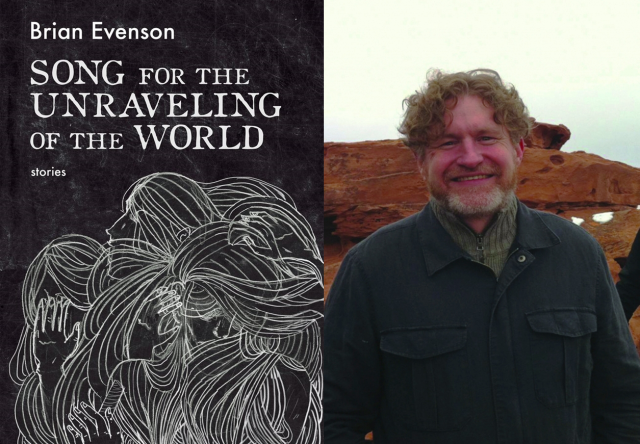 Established in 1872, Publisher’s Weekly is a weekly trade news magazine for publishers, booksellers, literary agents and librarians. The publication’s starred review indicates a work of exceptional quality—awarded to a minute fraction of its literary submissions.

Song for the Unraveling of the World, Evenson’s 240-page compendium of short stories, exists at the intersection of science fiction and horror. Packed with tales of brutal filmmakers, twilight therapy sessions and the reappearance of a newborn’s missing face, Publisher’s Weekly reviews: “These stories are carefully calibrated exercises in ambiguity in which Evenson … leaves it unclear how much of the off-kilterness exists outside of the deep-seated pathologies that motivate his characters.”

Evenson, who also writes under nom de plume B.K. Evenson, is the author of fictional works like A Collapse of Horses (2016), Windeye (2012), The Open Curtain (2006), The Wavering Knife (2004) and Dark Property (2002). His detective thriller Last Days received the 2009 American Library Association’s award for Best Horror Novel. His works have also been included in Time Out New York’s 2012 list of best books.

Evenson is also the recipient of three O. Henry Prizes, the 2006 International Horror Guild Award and a National Endowment for the Arts Literature Fellowship.

Song for the Unraveling of the World was released on June 1 by Coffee House Press.