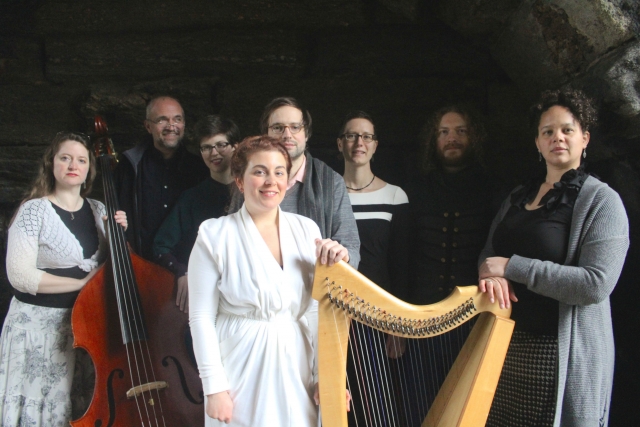 The musical collective Ghost Ensemble, of which Richter is the artistic director, presents seven entrancing performances in a variety of musical styles. Escobar will lend her experimental vocals as a special guest on a preview of Richter’s and librettist Edie Meidav’s forthcoming opera Tides of the Wolf. Other special guests include composers Jordan Dykstra (Music BFA 16) and J. P. A. Falzone.

Rounding out the program are:

Since Ghost Ensemble’s inception in 2012, the collective has been committed to “new musical perspectives that explore the act of listening.” The New York-based group’s debut LP We Who Walk Again (2018), replete with their signature academic avant-garde sounds, was lauded by critics as a prodigious listen both mysterious and exhilarating.

Richter is an accomplished composer and accordionist, trained in contemporary chamber music and traditional klezmer practices. His penchant for experimental improvisation extends to Ghost Ensemble’s transformative, liminal sounds. Richter previously served as a coordinator and artistic collaborator with SEM Ensemble, and as a resident composer at the biennial Ostrava Days festival from 2013 to 2017.

Escobar is a performer, vocalist and interdisciplinary artist from Mexico City. Her work primarily focuses on the voice’s and body’s relationship to “physical, social and memory spaces.” She is the recipient of two Performers Grants from the National Fund for the Arts in Mexico, a 2010 Mid Atlantic Arts Foundation (MAAF) grant, a 2014 NALAC Fund for the Arts (NFA) Master Artist Grant and a 2010 USArtists International Award. Escobar is also the founder, codirector and vocalist of experimental Mexican musical ensemble [LIMINAR].