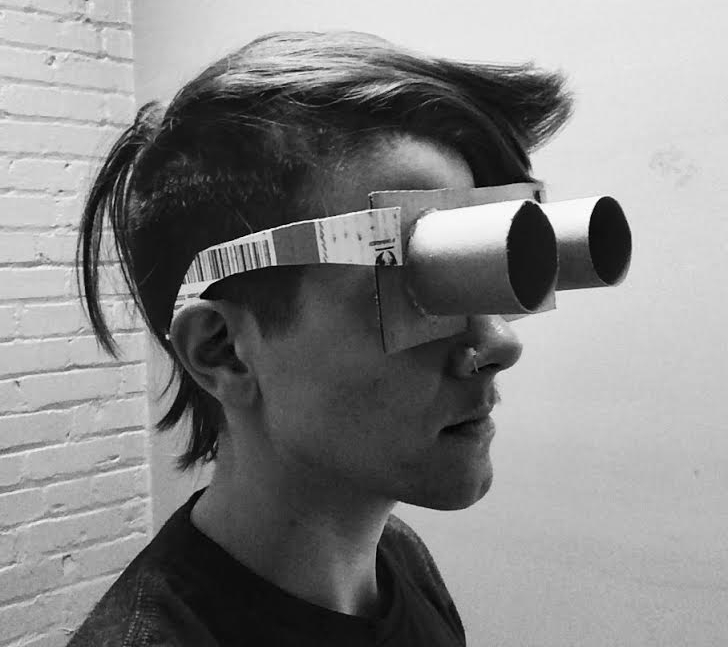 As a queer, gender nonconforming person, Molly Allis is creating art that cultivates hope and joy and aims to make children feel proud of who they are | Image: Molly Allis

Molly Allis (Music MFA 14) is a queer filmmaker, musician and educator as well as the artist behind All Together Now!, a new animated children’s show.

With a focus inclusivity, accessibility and kindness, the characters in All Together Now! have different gender identities, body types, abilities, family structures and cultural backgrounds. The show’s main character is Frankie, a 10-year old gender nonconforming kid, who uses they/them pronouns. Frankie’s interests are skateboarding, making costumes, dancing and playing drums in an activist marching band. Other characters in the show include:

The world of All Together Now! is rendered in bright colors reminiscent of the 90s, with pencils, markers, crayons and splashes of watercolor. The show depicts different folks facing life’s challenges together and emphasizes the importance of self-expression, sharing stories and living in community. 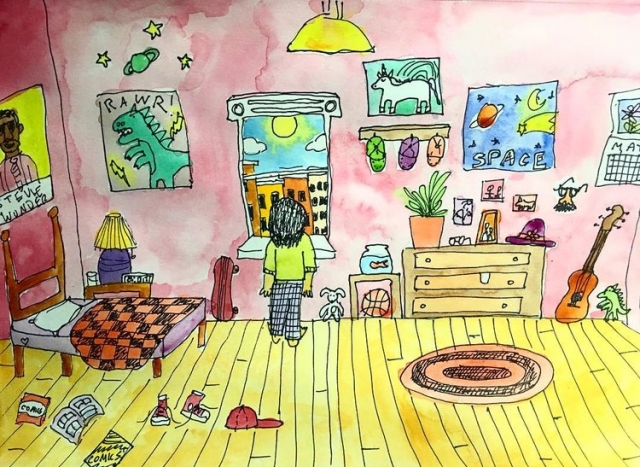 All Together Now! is set in the fictional town of Sun City, where characters hang out in places like the local radio station, a collectively-owned bookstore and the community garden | Image: Molly Allis

24700 had the opportunity to interview Allis about All Together Now!, the evolution of her art-making and the power of storytelling.

24700: What were some projects that lead up to All Together Now? What has your art practice looked like across time?

Allis: As an undergrad, I studied directing and design for theater and NYU. I got really interested in puppetry, and worked with the Bread & Puppet Theater, where I adopted their philosophy of “cheap art”—basically making art out of cardboard and recycled materials, because it felt important that art be something that is accessible and easily shareable. I also worked with Great Small Works Toy Theater Co. in Brooklyn, often working with puppetry and object theater on a miniature scale. They also had these monthly spaghetti dinners/art performances in New York, that really reinforced the idea for me that art and community belong together.

Then I was playing music in several bands, one of which was a 40-piece activist marching band called the Rude Mechanical Orchestra. Once again, the idea of art, community and activism was reinforced for me as belonging together. In the other bands I was in, I became interested in making music videos, and got into stop-motion animation. Animation and music are what got me into CalArts, although I really ended up focusing on creating immersive worlds that led people through a playful environment that had a narrative to it. I was really interested in these transformative spaces of play.

After I graduated from CalArts, I worked for several years at a place called ReDiscover Center that teaches kids how to use power tools and build sculptures out of recycled materials. I got really immersed in education and working with kids, and absorbed so much about their imaginations and make-believe, while still working within the framework of recycled materials and art as something that should be accessible and community-based. I began making interactive public art sculptures for kids that told stories. These were kinetic sculptures with narratives, that were really only slightly removed from animation. It was in making one of these installations that I developed the characters and the world for All Together Now! I suppose that’s a long way of saying, everything is connected in my practice, even though I often felt like it wasn’t, like I was going off on tangents and should just be working on one thing. But that’s not who I am, and I’m still learning how to embrace that. Sometimes you just have to wait and see how things eventually come together. This current project feels like great opportunity to synthesize all of the different things I like to do, which I’m excited about.

24700: Can you talk a bit about the intersection of empowerment and DIY projects? Why was this important to include in All Together Now?

Allis: I think DIY culture is really important on several levels. For one, it gives you the power to make something for yourself instead of buy it, so it’s a small opportunity to opt-out of a capitalist system. It also teaches you that everything around you has potential–everyday objects and materials can be transformed into something special and magical, if you take the time to look at an object differently and use your imagination. It also encourages skillsharing, working together and building community. You often have to ask questions and work with others to solve problems and reach your goal, which is great. I also think in this digital age, working with your hands and doing tactile things is really important. I’m not setting this show in the 90s per se, but I’m choosing not to focus on digital technology in the show, because I think people need to spend more time in their bodies. Finally, we are nourishing our imaginations when we create something for ourselves rather than buying a version of it. We are allowing ourselves to be creative and think for ourselves, which is so important. It empowers people to create their own culture and tell their own stories.

24700: What is the impact you hope to create by showing stories and characters like the ones in All Together Now?

Allis: My intention is for this show to provide people with opportunities for different ways of seeing and being in the world, that promote connection, celebration and empowerment amongst all kinds of people. I hope it is able to model people coming together despite their differences, learning from each others stories, and working together to create things that make their community a joyful, inclusive, nourishing place. I also hope that providing queer representation on a children’s show can help normalize people’s genders or bodies who don’t fit into a box. It’s often really hard to just let yourself be uniquely you, even as a queer person who is supposed to be more free in who they are. It’s so easy to put ourselves into boxes of what we are and aren’t. I’m hoping to create a more fluid, free version of what the world can be be on this show, with these characters and stories. I’m also hoping to make kindness, sincerity, vulnerability and love cool instead of uncool! 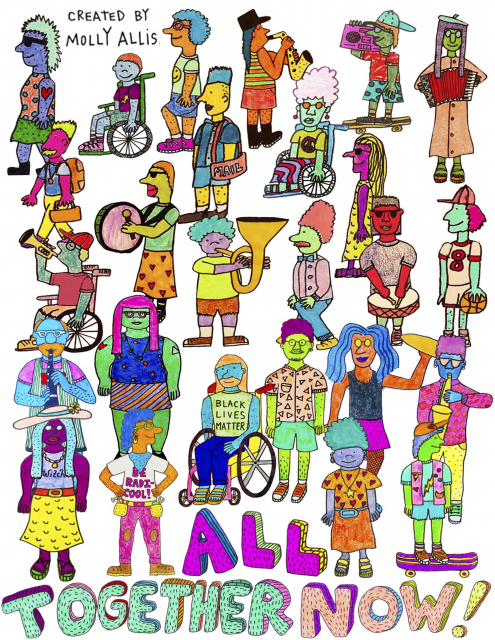 All Together Now! aims to give children an inclusive lens to see a wide range of characters openly living their truths | Image: Molly Allis

Although All Together Now! has not found a network home just yet, there has been an overwhelming support of its production on Kickstarter. In just a few weeks, the show surpassed its $15,000 funding goal–a testimony to the need for worlds like the one Allis has created.