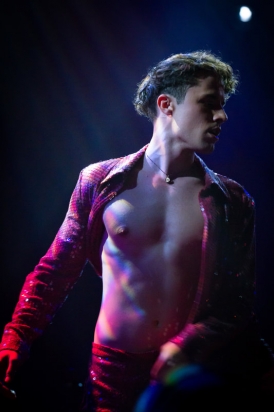 Fresh off the stage from three recent performances at The Sayers Club in Los Angeles, funk-rock band Perta is poised for rock ‘n roll stardom.

Bazulka met Kenrick and Zuker during their CalArts years, and rounded out the band with Boston-based musicians Siegal and Taylor. The band name Perta comes from a character in Naomi Wallace’s play adaptation of William Wharton’s novel Birdy.

In April, award-winning actor Alec Baldwin interviewed the unsigned quintet on an episode of Here’s the Thing, Baldwin’s biweekly WNYC-FM public radio segment in which listeners are invited “into the lives of artists, policy makers and performers.” For the Perta interview, Baldwin drew a distinction—while most of his guests are well-established in their fields and “on top of their mountain looking down,” he placed Perta at the base of their mountain, reckoning with the prospect of explosive forthcoming fame.

Of Bazulka, Baldwin said, “There are only a handful of people in a generation with his talent and stage presence. Within a year, maybe two, you will know his name.”

Baldwin shared similar sentiments for the band as a whole, prefacing the segment with a prediction: “This will be Here’s the Thing’s most downloaded episode of 2020.”

Bazulka’s story-driven lyrics provide a theatrical flair to Perta’s impressive sound—a fusion of Kenrick’s beloved American classics and glam rock, with a sheen of soulful funk. While Perta has only officially released one song called From Fire (2018), they have already garnered a profile on Paper Magazine, and performed at venues including the Troubadour and festivals like Kaaboo Del Mar. Perta was also included in Billboard Pride’s September 2018 Playlist.

“Originally some of the work we were writing was very folky—and I love a good storyline,” said Bazulka in an April 2018 Paper Magazine profile. “… It took us the past 2.5 years to find our sound—we figured From Fire would be a great way to set the tone for what we are capable of and where we are heading. We use live instrumentation, and eventually discovered that the rock and funk hybrid fits us best, because we can keep it honest, full of story, full of soul, and just a touch of some serious drama.”

Perta is currently working on their debut release.