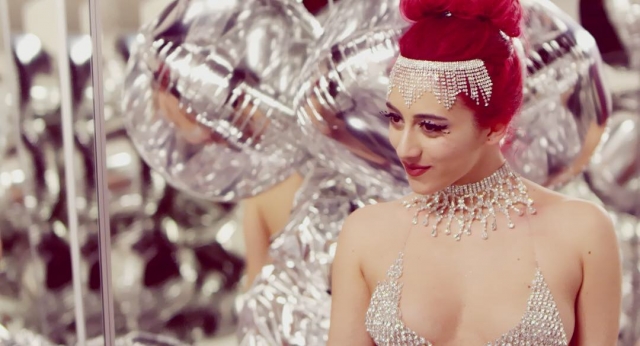 The driving force behind CalArts alum Sarah El Khawand’s (Film/Video MFA 18) recent film projects is her alter ego Molly Pop, a burlesque star with bright magenta hair and a wardrobe of bedazzled and latex outfits. Molly Pop is the main character of LA Girl, the musical short film she completed for her thesis, which she plans to develop into a full-length feature film.

“It is really why I chose CalArts for my MFA,” said El Khawand. “Everything was available to do a big show and allowed me to bring Molly Pop’s world to life.”

The Molly Pop cinematic universe is abound with bright colors and highly stylized aesthetics, but also themes of the modern female experience—their “everyday struggles, sexuality and road to success.” El Khawand’s larger-than-life avatar was birthed by a need to tell the “crazy stories” that might have been considered too controversial in her native Lebanon.

“That’s the magic of Molly Pop,” said El Khawand. “She lives in her own world, creates her own rules in our world today.”

“Talking about women’s sexuality in the Middle East is almost nonexistent and people were so shocked but also entertained,” said El Khawand. “It is how people reacted to it that interests me the most.”

Her music video credits also include producing Xzibit’s War. In the first minute, a man clutching a backpack runs down the city streets at breakneck speed. His sprint across an intersection is cut short by a silver sedan, tossing him over the hood like a rag doll before planting onto the asphalt, blood pooling by his head. El Khawand engineered this realistic hit-and-run, despite having never directed such a stunt, especially on such a big-budget, high-profile shoot.

While the War music video is a stark stylistic departure from El Khawand’s portfolio of bold and feminine imagery, it’s a testament to her versatility across styles and genres. She has also worked as assistant director of music videos for artists like Kali Uchis (After the Storm ft. Tyler, The Creator and Bootsy Collins), Allie X (Paper Love; Casanova ft. VÉRITÉ), Madison Beer (Say it to My Face) and Bebe Huxley (Elaine; Scorpio).

The ambitious filmmaker also has her sights set on a new docuseries about Arab women.

“I hope to bring awareness about the struggles of Arab women, especially the ones living in dangerous situations in the Middle East,” said El Khawand. “I also want to explore the sexuality of Arab women who liberated themselves from traditions and religious restraints, and gave themselves a new chance at life.”

When asked what El Khawand hopes people take away from her art, she responded, “Women are human being[s], we are right sometimes and we are wrong sometimes. I hope to [inspire] women that it is okay to be vulnerable and make the wrong decisions, but what is most important is how we bounce from it and get back on our feet. The best way to fight patriarchy, in my opinion, is to not let it stop us from achieving our dreams, to not let it stop us from enjoying our sexuality, to simply not let it get in the way of our freedom and happiness. I know it is not always easy but we can’t stop trying. I believe one day it will happen.”