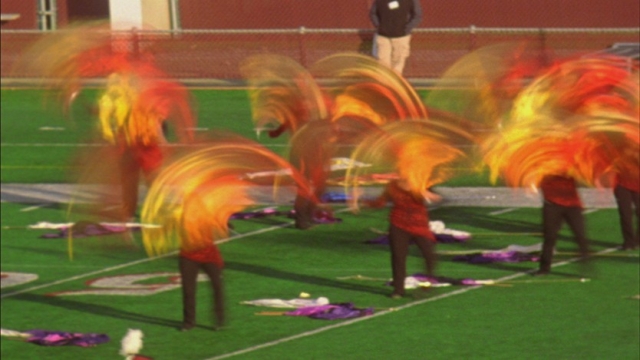 Ericka Beckman’s (Art MFA 76) works are on display in ‘Ericka Beckman: Double Reverse,’ an exhibition running through July 28 at MIT. | Photo from Facebook.

Double Reverse traverses the space between “games and gambling, the larger structures of capital and the often gendered conditions of labor.” The exhibit includes sculptural and theatrically lit installations that accompany her films, such as Switch Center (2003), Cinderella (1986), Tension Building (2016) and her milestone work You the Better (1983/2015).

The New York- and Boston-based filmmaker has curated a catalogue of colorful folkloric works over a career spanning more than three decades. Beckman’s films typically feature brightly colored figures moving against dark and spatially ambiguous backdrops while engaging themes like roleplay, gender, competition and control. In a 1984 issue of Millenium Film Journal, dance historian and writer Sally Banes described Beckman’s work as producing a “satisfying, even delightful slipperiness of meaning, a mental vertigo induced by the changefulness of contexts and rules in regard to a given word or object.”

Beckman’s films have been screened at numerous venues, including Kunsthalle Bern in Switzerland, the Museum of Contemporary (MoCA) Art in Los Angeles, the Museum of Modern Art (MoMA) in New York and Le Magasin in France. Her works adorn the collections of the Metropolitan Museum, MoMA, the Whitney Museum, The Walker Art Center, the British Film Institute, the Zabludowicz Collection and the Anthology Film Archives.