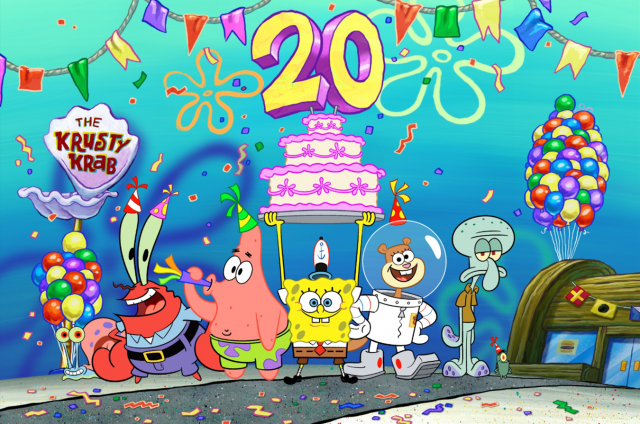 The residents of Bikini Bottom will band together to celebrate SpongeBob SquarePants’ Big Birthday Blowout, the porous protagonist’s 20th anniversary this Friday (July 12) on Nickelodeon.

SpongeBob SquarePants was created by legendary animator Stephen Hillenburg (Film/Video MFA 92). A former marine biologist, Hillenburg created a comic book called Intertidal Zone while studying at CalArts. The comic starred early versions of SpongeBob, who caught the eye of fellow Nickelodeon animators while Hillenburg served as creative director of Rocko’s Modern Life. SpongeBob SquarePants premiered on May 1, 1999, and has captivated audiences with the unfailingly optimistic sea sponge’s adventures and his nautical cast of supporting characters. The birthday blowout celebrates two decades of the cartoon’s influence and enduring charm.

Joining the celebration is fellow CalArtian, actor and singer David Hasselhoff (Theater 73). Hasselhoff, who famously shotgunned SpongeBob and Patrick from his pectorals into the Pacific in The SpongeBob SquarePants Movie (2004), will reunite with the pair during the birthday blowout. The former Baywatch star stated that the anniversary special serves as a “heartwarming tribute” to Hillenburg, who died of ALS complications in November 2018.

“Steve Hillenburg gave me the gift of a lifetime when he asked me to voice his porous alter ego, SpongeBob SquarePants,” said SpongeBob voice actor Tom Kenny in an interview with Entertainment Weekly. “He changed my life and all of our lives.”

Kenny, who will also play Patchy the Pirate and SpongeBob’s surface world counterpart during the special, will be joined by Hasselhoff and the rest of the voice cast: Bill Fagerbakke (Patrick Star), Rodger Bumpass (Squidward Tentacles), Clancy Brown (Mr. Krabs), Carolyn Lawrence (Sandy Cheeks) and Mr. Lawrence (Plankton). The crew convenes at “The Trusty Slab,” where Kenny mans the fry cook as the SquarePants-esque “JimBob.”