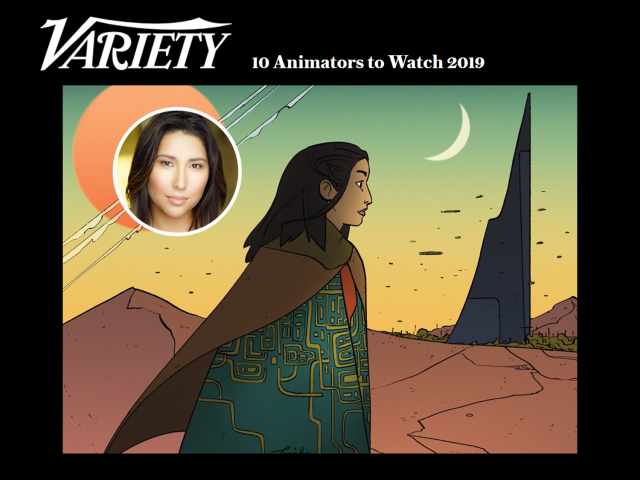 Emily Dean (Film/Video 13) has been spotlighted among Variety’s 2019 “10 Animators to Watch,” the publication’s annual listing of noteworthy talent in the animation industry.

Dean’s filmography is a dimension of fantastical worlds and multilayered characters. As a Chinese Australian artist, Dean maintains that embedding a personal connection into the material is essential to her work. She is currently working on Tao, a Sony Pictures animated feature.

“It’s all very secretive at this point as the plot is being kept under wraps, but it’s a sci-fi adventure set in China, and it’s going to be spectacular,” said Dean in the Variety feature. “… Animators love to take risks, and I’m thrilled by new opportunities that are born out of technological advances.”

Dean’s studies at CalArts’ Character Animation Program led her to an internship at Pixar, followed by serving as a story artist on The Lego Batman Movie (2017) and The Lego Movie 2: The Second Part (2019). She also worked on dystopia sci-fi thriller Hotel Artemis (2018), alongside esteemed cinematographer Chung-hoon Chung (Oldboy [2005], The Handmaiden [2016], It [2017]).

“As a creator, my projects focus on diverse, female-driven genre stories set in imaginative worlds,” said Dean in a December 2018 Voyage LA profile. “I specialize in developing epic science fiction and fantasy action, adventure and dramatic stories that center around a strong and complex female protagonist, or female-centric relationship. I develop work mainly for four-quadrant audiences, however, I also have projects that are for mature audiences.”

Dean’s fairytale short film Forget Me Not (2011) was nominated for an Australian Academy Award (AACTA) in 2012, and her live action sci-fi short Andromeda (2018) screened at the Los Angeles Asian Pacific Film Festival. She is currently attached as a director to Wishtree, an animated Netflix adaptation of Katherine Applegate’s award-winning children’s book of the same name.

Dean is also the founder of Grade 8 Productions, a production company that develops original works for television, film and streaming services. Established in 2017, Dean seeks to expand the current boutique operation into a fully staffed enterprise.