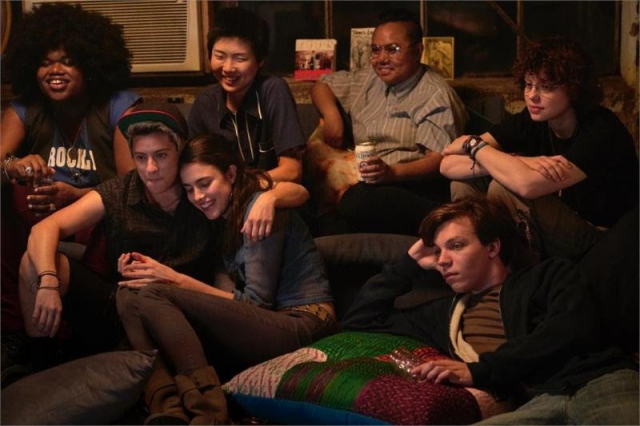 Editor’s note: Adam has been nominated for a 2020 GLAAD Award for Outstanding Film – Limited Release.

Outfest presents more than 150 films to an audience of more than 40,000. Now in its 37th year, Outfest Los Angeles is LA’s longest-running film festival and considered “the preeminent LGBTQ film festival in the world.”

Adam, Ernst’s first feature film, had its world premiere at the 2019 Sundance Film Festival. Ernst wrote a Medium post about his experience directing the film, for which he found “huge potential … to push and pull on the screenplay to further center trans characters in deeper ways.” At Outfest, Adam will screen on Sunday, July 21 at the TCL Chinese 6 Theatres.

Adam was adapted from Ariel Schrag’s 2014 young adult novel of the same name. Set in the Bushwick neighborhood of Brooklyn in 2006, the titular character, a straight cisgender high schooler, hangs out with his sister’s group of LGBTQ college friends over the summer. At a marriage equality march, Adam meets Gillian, a lesbian activist who assumes he is a trans man. Adam repeatedly botches his attempts to correct her as the pair grow closer, and a comedy of errors ensues. The 95-minute long film flips the “trans deception” trope on its head, culminating in a playful and genuine performance from the film’s diverse cast.

In 2015, Ernst was nominated for an Emmy Award for directing and producing the Amazon web series Transparent: This is Me. He also produced We’ve Been Around, an online docuseries about the lives of transgender pioneers in collaboration with Focus Features.

Ernst’s films have been screened at venues including the 2014 Whitney Biennial, Sundance Film Festival, International Short Film Festival Oberhausen and the Hammer Museum. Ernst is the recipient of a Project Involve Fellow, the 2015 Point Foundation Horizon Award, a Point Foundation scholarship and the ACLU Liberty Award for his contributions to transgender representation in the media.