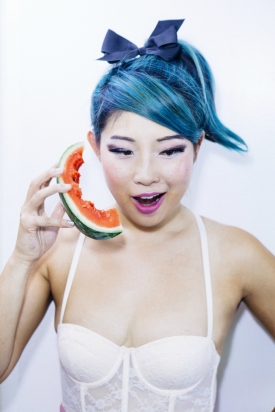 Space-pop quartet Polartropica are set to draw audiences into their sonic orbit at the Bootleg Theater in Los Angeles on Monday, July 29.

Polartropica is comprised of vocalist Ihui Cherise Wu, bassist Graham Chapman (Music BFA 09), drummer Andrew Lessman (Music BFA 09) and guitarist Alexander Noice (Music BFA 08). Wu assembled the band in December 2015, and together they have since been spinning interstellar tracks about animal rights, the perils of addiction and the monotony of routine.

In an October 2018 LA Weekly profile, Wu said of her bandmates:

Alex [Noice] is kind of an experimental guitarist in his own projects. He brings psychedelic, interesting sounds and pushes … what the guitar can do. It’s a little proggy and space-pop. He adds another element to the music I write—it’s a great combination. Graham [Chapman] is a bassist but he also has the voice of an angel. Andrew [Lessman] is the drummer but he also triggers the different samples, which is a big job because they all come in at different times. It’s not just a backing track. He’s balancing a lot. He’s the architect of our live sound and one of the best drummers I’ve ever played with.

Wu named the band after singer-songwriter Mark Foster’s Polartropic, a menacing yet uptempo song she described as difficult to pin down to a specific genre. She admired the contrast between complete opposites—polar and tropical—and wanted the band’s sound to accommodate such duality and that which exists in liminal spaces.

Since releasing a debut EP in 2016, Astrodreams (Lolipop Records), Wu has penned songs like Olympia, a synthy yet commanding electropop beat inspired by a gymnast who face-planted during the Olympics, then brushed themselves off and completed the routine; and Golden Soul, a dark and carousel-esque track about the drug addiction of a friend’s sister. Polartropica’s lyrics, which are often socially conscious and tend toward melancholy and heartache, are buoyed by the musicians’ bright time-warping sounds and Wu’s airy vocals.

Polartropica was recently named “Best Indie-Pop Band” in LA Weekly’s 2019 Best of LA Music issue, which lauded the group’s ability to “transport the listener to magical, faraway places, but … also inspire you to look deeper into your heart.”