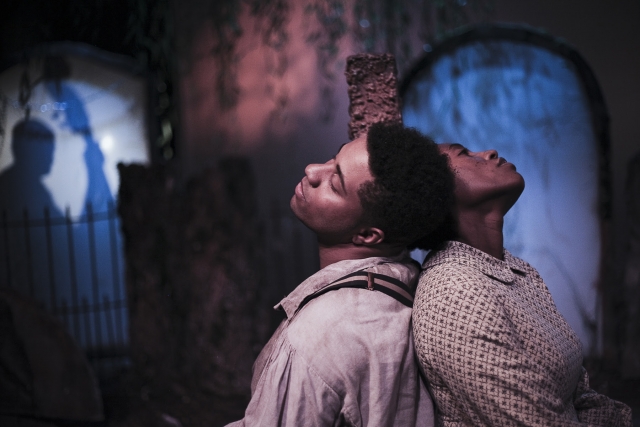 Gunshot Medley confronts America’s racism through live music and spoken word as told by Betty, Alvis and George, all of whom are based on historically documented slaves who died in North Carolina before the signing of The Emancipation Proclamation. The three occupy a “hereafter” limbo space reminiscent of the site of their deaths—a cemetery-like space dominated by a tree, from which they were presumably lynched.

Daniel, a North Carolina native, began writing the screenplay on the heels of the tragic 2015 Charleston Church Massacre, and the contention surrounding the usage of the confederate flag that followed.

The play received widespread acclaim in 2017 during its month-long run at the Edinburgh Festival Fringe (it was one of three CalArts productions at the festival that year) and was included in the second edition of the anthology Contemporary Plays by Women of Color. Gunshot Medley is Daniel’s first work produced for a theatrical run. The Rogue Machine Theatre’s revival of Gunshot Medley is directed by Desean K. Terry, brought to life by performers from acting company Collaborative Artists Bloc (CAB).

Daniel is a playwright, actor and vocalist whose work addresses sociopolitical issues from the perspective of the African American experience. Her other work includes one-woman show (performed by Daniel) Rain, River, Ocean, which, like Gunshot Medley, claims its origin at the CalArts New Works Festival for students.

See event details below for individual performance dates and times.

A Special American Saga Revival of - Gunshot Medley: Part I