We’re hosting a @mcfetridge x @warbyparker giveaway❗️❗️To celebrate the launch of our collaboration with the California-based multidisciplinary artist, we’re giving away one pair of sunglasses from the collection ➕ a limited-edition art print by Geoff for you and a friend! To enter, like this post and tag a friend in the comments. (FYI: Entries are unlimited so tag as many friends as you’d like to increase your chances! 😉) . . . . . No purchase necessary. 50 U.S./DC, 18+. Enter by 7/25/19 at 11:59 P.M. ET. See official rules at warby.me/2LDI9zh for details. Void where prohibited.

McFetridge’s latest brand collaboration with Warby Parker was released earlier this week (July 23). Inspired by his own vintage frames, the multihyphenate designer created two styles of sunglasses: Edgemont, named after his hometown in Canada, and The Atwater, named after the neighborhood in L.A. where he currently works. 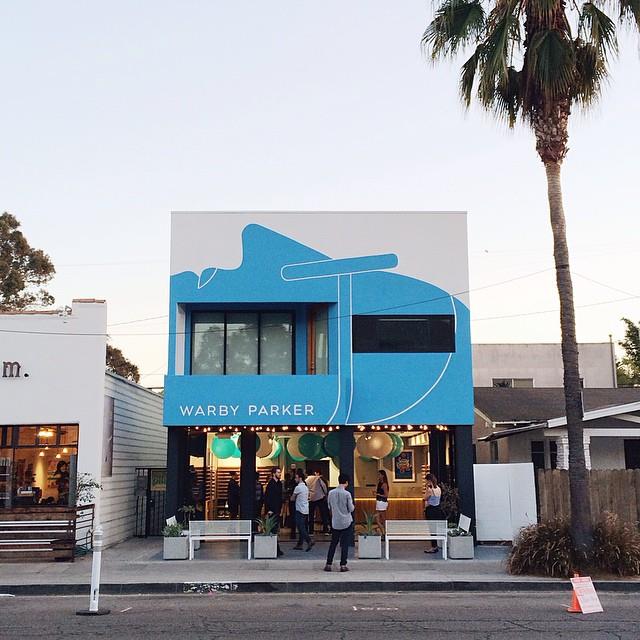 Mural by Geoff McFetridge at the Warby Parker store on Abbot Kinney in Venice. | Image: Via Facebook

This is not the first time the brand has worked with the artist. Since Warby Parker’s opening in 2013, McFetridge has created several giant murals for its stores, including the shop on Abbot Kinney in Venice, Calif.

McFetridge’s long standing influence as a designer across multiple fields was officially recognized earlier this year by AIGA, the professional association for design. In March, the artist was awarded a 2019 AIGA Medal, which is the most distinguished honor in the design industry.

Geoff McFetridge is one of the rare artists who has bridged the two peaks of art and commercial design successfully. There’s no trickery involved: it’s just that his attitude toward work, life, art, and making is all the same to him. He sees and approaches every creative act, and even day to day life, with the same attitude: everything is important, everything is process. The work he makes—across painting, animation, design, branding, drawing—is always imbued with a language he seeks not to teach us, but to draw out of us.

No matter how diverse his projects, they can always be recognized as one of his. It’s almost as if McFetridge’s portfolio is like a bunch of different types of clothing hanging out to dry in the sunshine, every piece tied together by the same piece of string.

McFetridge, who had already found success as an artist and designer before coming to CalArts, looked at the Institute as a vehicle for self-discovery. In a video by AIGA, he said,  “At CalArts I sort of like, stopped doing everything I was good at – drawing, image making, and I just made work that was focusing on how am I thinking? What can I do to make it clear?”

Since graduating from CalArts, McFetridge has continually pushed the boundaries of what it means to be a contemporary artist. According to AIGA, “The most striking aspect of his portfolio is that his choice of project and client is based on his integrity in that every client he’s worked for, or every collaborator he’s partnered with, fits his ideologies, his interests, and his taste.”

Check out the full video with McFetridge by AIGA below: