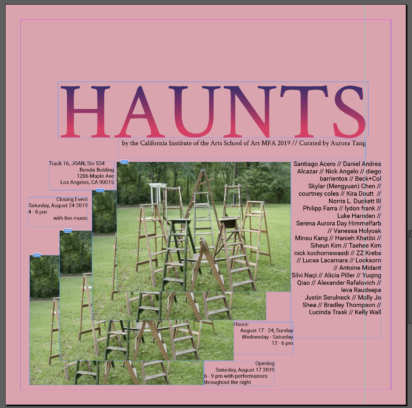 The School of Art presents Haunts, an exhibition of MFA 19 works from the Art, Photography and Media and Art and Technology programs, on Saturday, Aug. 17 at the historic Bendix Building in downtown Los Angeles. The exhibition, held in three venues in the Bendix (JOAN, Track 16 and Ste 534), is curated by Aurora Tang, researcher and program manager at the Center for Land Use Interpretation.

The exhibition’s opening reception includes performances from the following artists:

Many of the participating artists were part of last year’s group exhibition Superflexible, which sprawled across the CalArts campus to explore the idea of “play.”