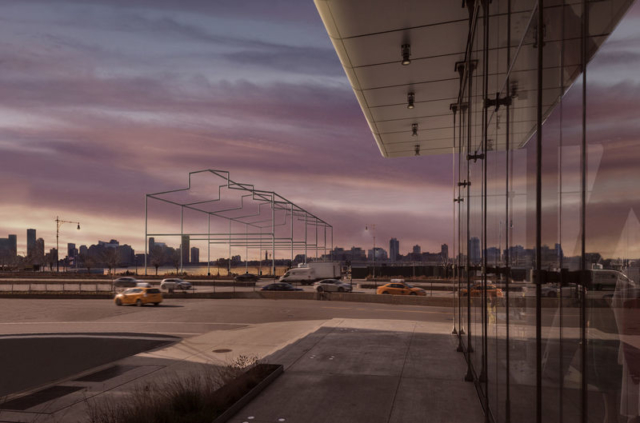 Rendering of ‘Day’s End’ by David Hammons, as seen from the Whitney Museum of American Art. | Courtesy Guy Nordenson and Associates

On Monday, Sept. 16, the Whitney Museum of American Art in New York celebrated the groundbreaking for David Hammons’ (Chouinard 68) upcoming commissioned installation Day’s End, which is slated for completion by fall 2020.

Hammons drew inspiration from a 1975 site-specific work by Gordon Matta-Clark, in which he transformed the then-abandoned Pier 52 shed into a sculpture by cutting openings into the structure. Day’s End alludes to the history of New York’s waterfront by creating a “three-dimensional drawing in space” that occupies the exact location and dimensions of the original Pier 52 structure. The space, once a gathering place for gay and artist communities during the ’70s and ’80s, will coexist with the planned park at Gansevoort Peninsula, designed by the Hudson River Park Trust (HRPT).

“The Whitney’s collaboration with David Hammons, one of the most influential artists of our time, represents our profound commitment to working with living artists and supporting their visions intimate or grand,” said Adam D. Weinberg, Alice Pratt Brown Director of the Whitney Museum of American Art. “The open form of the work—a building without a roof, walls, floor, doors or windows—is a welcoming metaphor that represents our commitment to community and civic good.

Just steps away from the Whitney, Day’s End celebrates the history of the Hudson River waterfront and the neighborhood and the City. We are deeply grateful for the support Day’s End has already received from New York City, as well as neighborhood, arts, historic preservation, LGBTQ, commercial and environmental groups, and we look forward to the ribbon-cutting in fall of 2020.”

The New York-based Hammons is known for works that engage with Black American culture, rendered from unusual materials including bottle caps and chicken wing bones. His recent solo exhibition, Harmolodic Thinker, ran from May to August this year at Hauser & Wirth Los Angeles. His works hang in the collections of the Whitney Museum of American Art, The Museum of Modern Art, the Museum of Contemporary Art (Chicago and Los Angeles), the Fogg Museum in Massachusetts, the Stedelijk Museum in Amsterdam and Tate Britain. Hammons is the recipient of a 1984 Guggenheim Fellowship and a 1991 MacArthur fellowship.