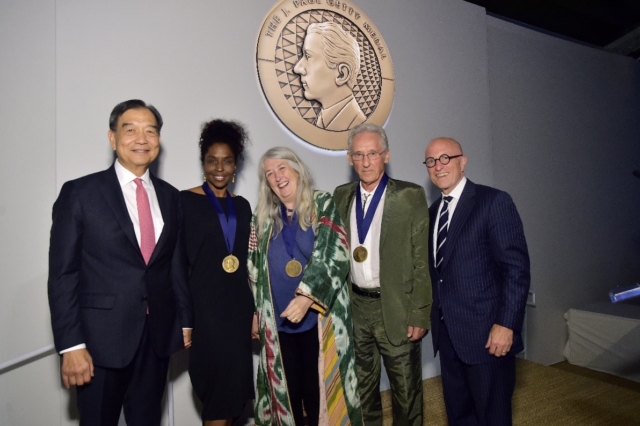 Ruscha is a Los Angeles-based artist whose work, often associated with the Pop Art movement, “uncovers the profound in the commonplace, bringing wit and humor to images of the everyday.” His early abstract pieces abandoned the academic underpinnings typical of Abstract Expressionists, opting instead to bring commercial techniques and text to the forefront of his work. According to the Getty, Ruscha’s art from the ‘60s explores the “noise and fluidity of language,” and led to a prolific career marked with design work at various advertising agencies and more than a dozen art and photography books. His idiosyncratic works are rendered from various materials, including pastel, dry pigments, and even spinach and carrot juice.

Ruscha represented the U.S. at the 2005 Venice Biennale with his 10-painting installation Course of Empire, which was later presented concurrently with Thomas Cole’s painting cycle of the same name at the National Gallery in London in 2018. He is the recipient of the 2006 Cultural Award from the German Society for Photography and the 2009 National Arts Award. Ruscha was also named in Time’s 2013 list of the 100 most influential people in the world.