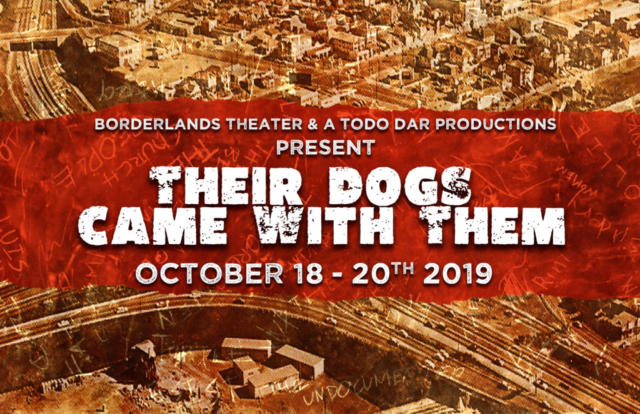 This month, CalArts alums Virginia Grise (MFA Theater 09) and Kendra Ware (MFA Theater 09) collaborate on Their Dogs Came With Them, a new play about Chicanx life adapted for the stage by Grise from Helena Maria Viramontes’ novel of the same name. Ware directs the production.

Commissioned by the Tucson, Ariz.-based Borderlands Theater in 2015, the play centers on the struggles of four Mexican-American youth in the 1960s. It asks audiences to consider, “What happens to a community, and the people that live there, when a series of four intersecting freeways are built right through the heart of their neighborhood?”

Although Their Dogs Came With Them is originally set in 1960s Los Angeles, Tucson’s minority communities were facing many similar issues, from inequity and access to gentrification. In the 1960s, some of Tucson’s most densely populated immigrant neighborhoods were completely destroyed in order to make space for a brand new convention center. Both this real event and the events in Their Dogs Came With Them raise questions about how city planning decisions are made and who bears the burden of their impacts.

There will be three site-specific performances in October, taking place beneath the I-19 freeway in South Tucson.

In 2017, Grise was awarded an Agnese Nelms Haury Visiting Fellowship from the University of Arizona to workshop early drafts of the script alongside community members in Arizona who had experienced the aforementioned events. Through this fellowship and additional support from the National New Play Network, Grise began a series of theater workshops inside Perryville Women’s Prison in Goodyear, Arizona, where the first rendition of Their Dogs Came With Them came to life. This was Grise’s way of making the world of theater transparent and accessible to those incarcerated; and the production premiered at the prison’s Santa Cruz Unit in February 2019. It included actors from inside the prison as well as collaborating artists from across the US. Ware served as co-director for the Perryville production.

Manuel Muñoz, director of University of Arizona’s Creative Writing program, has worked alongside Grise through various stages of the process, and comments:

Their Dogs Came With Them is an important reminder that Chicana literature has long concerned itself with the importance of the environment, that it has valued the idea of home well-beyond urban or spatial definitions: what is defined as ‘blight’ or condemned as uninhabitable by city governments and planners is a cherished place of refuge, a sanctuary for the besieged.

Grise is an award-winning writer and multimedia artist whose work includes Your Healing is Killing Me (Plays Inverse Press), blu (Yale University Press) and The Panza Monologues (University of Texas Press). An epic poem for the stage, blu was Grise’s MFA thesis project at CalArts, and went on to win the 2010 Yale Drama Series Award. In her biography, she describes herself: “From panzas to prisons, from street theatre to large-scale multimedia performances, from princess to chafa – Virginia Grise writes plays that are set in bars without windows, barrio rooftops, and lesbian bedrooms.” 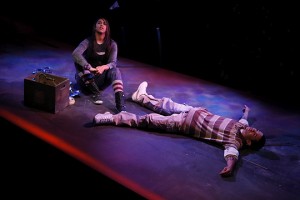 Ware is a performance-based multidisciplinary artist who uses elements of ritual theatrics and experimental performance concepts to explore the intersections of race, gender, class, cultural politics and identity. Her original work has shown at REDCAT, Son of Semele, Santa Barbara Contemporary Museum of Art, The Last Bookstore and others.

Their Dogs Came With Them will also feature a live original score at each show. The music was composed by musical director Martha Gonzalez (of the Grammy Award-winning band Quetzal) and will be performed by Juan Perez, Tylana Eomoto and guitarist Bob Robles. The score is a blend of many sounds integral to Chicanx music — Mexican boleros, classic rock, doo-wop, R&B and gospel.

The production runs Oct. 18 – 20, and tickets can be purchased online at the Borderlands Theater website.

Their Dogs Came With Them