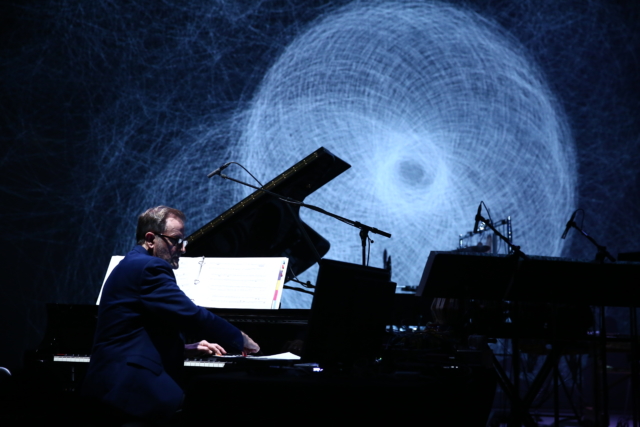 One of the highlights of the 2019 CalArts Weekend (Oct. 11-12) is Saturday’s evening event: Propositional Music: David Rosenboom Portrait Concert. This Wild Beast Concert Series performance honors the work of David Rosenboom, dean of The Herb Alpert School of Music, who steps down in May after 30 years as dean. Free and open to the public, the concert is a celebratory survey of his five-decade-long musical career.

The program features fellow faculty, students, alums and distinguished guests and begins with a live performance of Portable Gold and Philosophers’ Stones (Deviant Resonances), a composition for brainwaves. Rosenboom’s experimentation with brainwave music began in the 1960s and has since cemented his status as a pioneer in music technology. The performance features Rosenboom alongside performer-composers Sara Belle Reid (Music MFA 15) and Andreas Levisianos (Music DMA 15).

Rosenboom is a composer, theorist, technologist and educator heralded by The New York Times as an “avatar of experimental music.” A similarly named 50-year retrospective of his work, David Rosenboom: Propositional Music, was featured during a three-day series at the Whitney Museum of American Art in New York in 2015.

Preceding Saturday’s concert is a pre-concert talk with Rosenboom on Friday, Oct. 11 at 4 pm in G201-202 on the CalArts campus. The artist discusses his prolific career and body of influential work, featuring a special introduction by his daughter Lindsay Rosenboom (Music BFA 11).