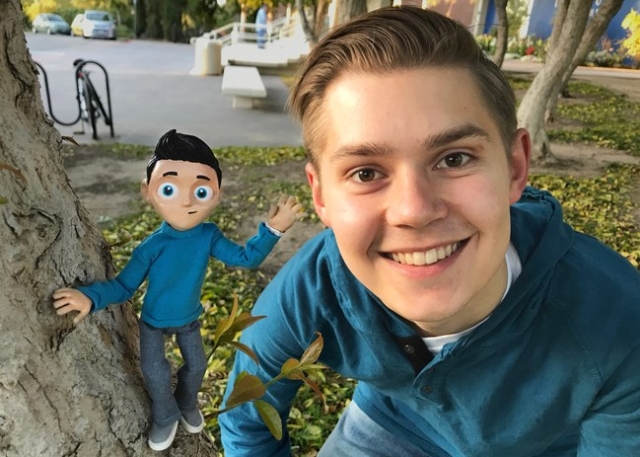 Blake Derksen uses stop motion and science fiction to engage with the story of his own cancer journey | Image: Reimagine Well

On Tuesday Oct. 29, tune in for a livestream of The Other Space, a stop-motion film from Blake Derksen (Film/Video BFA 19). The four-minute film was inspired by Derksen’s adolescent battle with cancer, and has already drawn attention from individuals and organizations who are collectively trying to increase the project’s visibility.

One of those individuals is Roger Holzberg (Theater BFA 76), a former Disney Imagineer, co-founder of Reimagine Well and cancer survivor. He taught Healthcare By Design, a multidisciplinary course in the CalArts School of Theater, which is where he came across storyboards for The Other Space.

“I was blown away,” he comments. “I realized immediately that this story, and the incredibly stop-motion animation style that he used to tell it, could be very inspirational for pediatric and adolescent patients following in Blake’s footsteps.”

Of his own experience and the resulting film, Derksen reflects:

Hearing the words, ‘You have cancer!’ at age 16 is overwhelming, to say the least. Even with the support of my family and medical team, sometimes it was still hard to see the light at the end of the tunnel. Through my time in the hospital and beyond, staying creative was very therapeutic and led me to make this film.

Open the Portal (OTP), an independent stop-motion studio headed by David Braun (Film/ Video BFA 13) will stream the film on its Instagram on Tuesday at 12 pm PT. Derksen was an intern at OTP and has since gone on to work professionally on several of their projects. OTP also aided in the development and production of The Other Space.

At the same time, the film will be streamed on Facebook by Reimagine Well, a company that designs and builds immersive healing programs for hospitals and treatment centers. Their goal is to develop experiences and content that improve the patient journey, and they have invited partner hospitals, clinicians and more 6,000 patients and families registered in their support network to tune in.

With this film, Derksen hopes “to show kids that while their situation might be tough, they can remain optimistic and be courageous in the face of hardship.”

Livestream of The Other Space