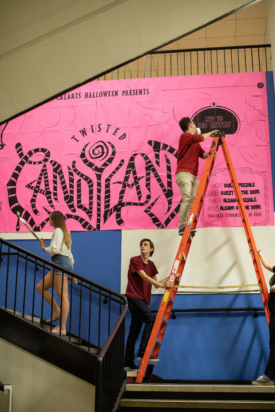 The theme of this year’s CalArts Halloween Party is Twisted Candyland. The legendary event, which takes place on campus on Nov. 1, is entirely student-produced and features elaborate stage design, decorations and a full lineup of live musical performances and activities. One of the longstanding traditions of the Halloween festivities at CalArts is the coveted collection of themed posters created by BFA-4 Graphic Design students.

This year’s poster production was coordinated by Alex Cerutti (Art BFA 20). During the first week of school, he shared the theme with his class and marked their deadlines. Afterwards, the designers paired up and began brainstorming. They had three weeks to complete their designs and one week to prep and screen print their posters.

“In terms of design, the Halloween Producers were great and gave us all full creative as long as it fell under the Twisted Candyland theme,” Cerutti said. Because of this, every poster looks very different and is uniquely individual. The one thing we agreed on as a class was to use fluorescent inks, which you see throughout.” 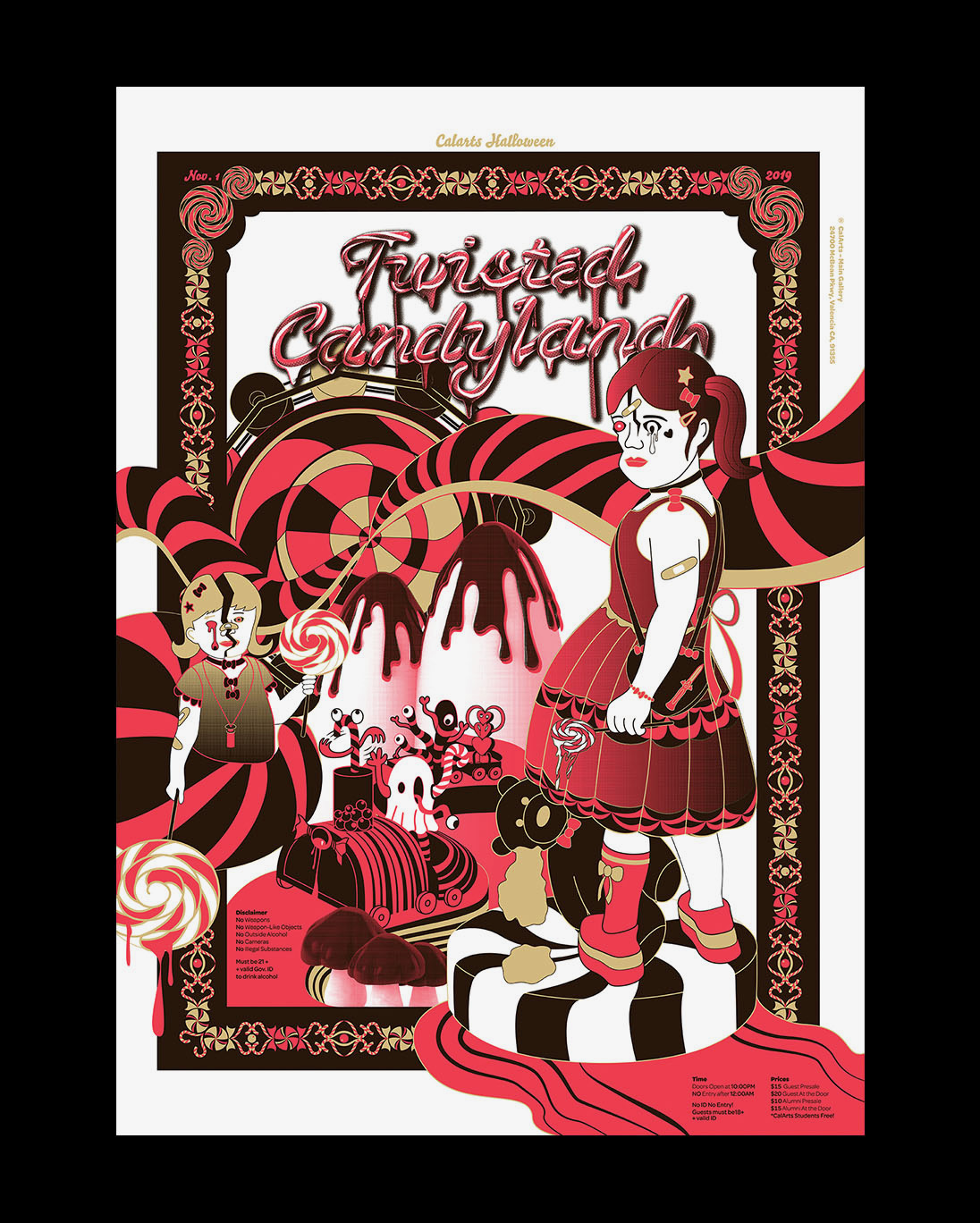 24700: Did you come up with the concept together?
David Yoo: Our theme for Twisted Candyland was inspired by the idea of someone who found themselves in a psychedelic box of Candy Land.

24700: Were there any creative techniques you used or experimented with for the first time when making your poster?
David Yoo: I used Cinema 4D to create 3D elements to put into poster. Usually 3D elements like that are hard to screen print, but with the help of our studiomate Alex, we found a way to do it. What was interesting about working with Allison was that since we both have very different styles, we wanted to combine what we were really good at (3D for me, illustration for Allison) and create a poster that is stylistically harmonized. 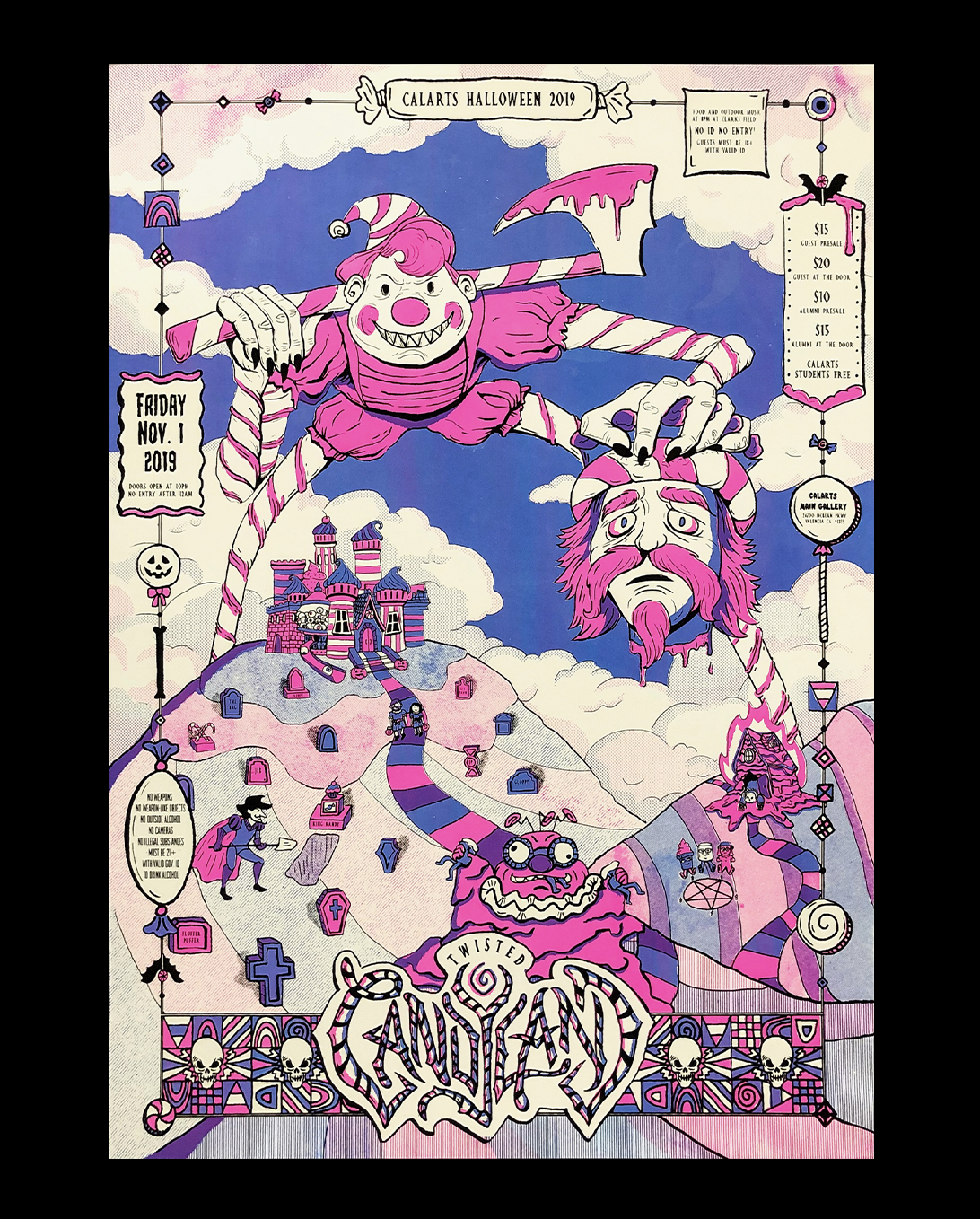 24700: What was the collaboration process like for you?
Jessica Peng: For Bryan and I, the collaboration process has been honed over a series of different projects. We work together all the time. This poster is really special to us because we wanted to try a bunch of new things. I tried a new style of lettering for our logo, and we tested new photoshop brushes for our illustration. We also usually work in Illustrator, so the move to Photoshop was very new as well. Finally, we decided to use glow in the dark ink as well, which was an exciting prospect because the two of us are both very interested in materiality and interaction. 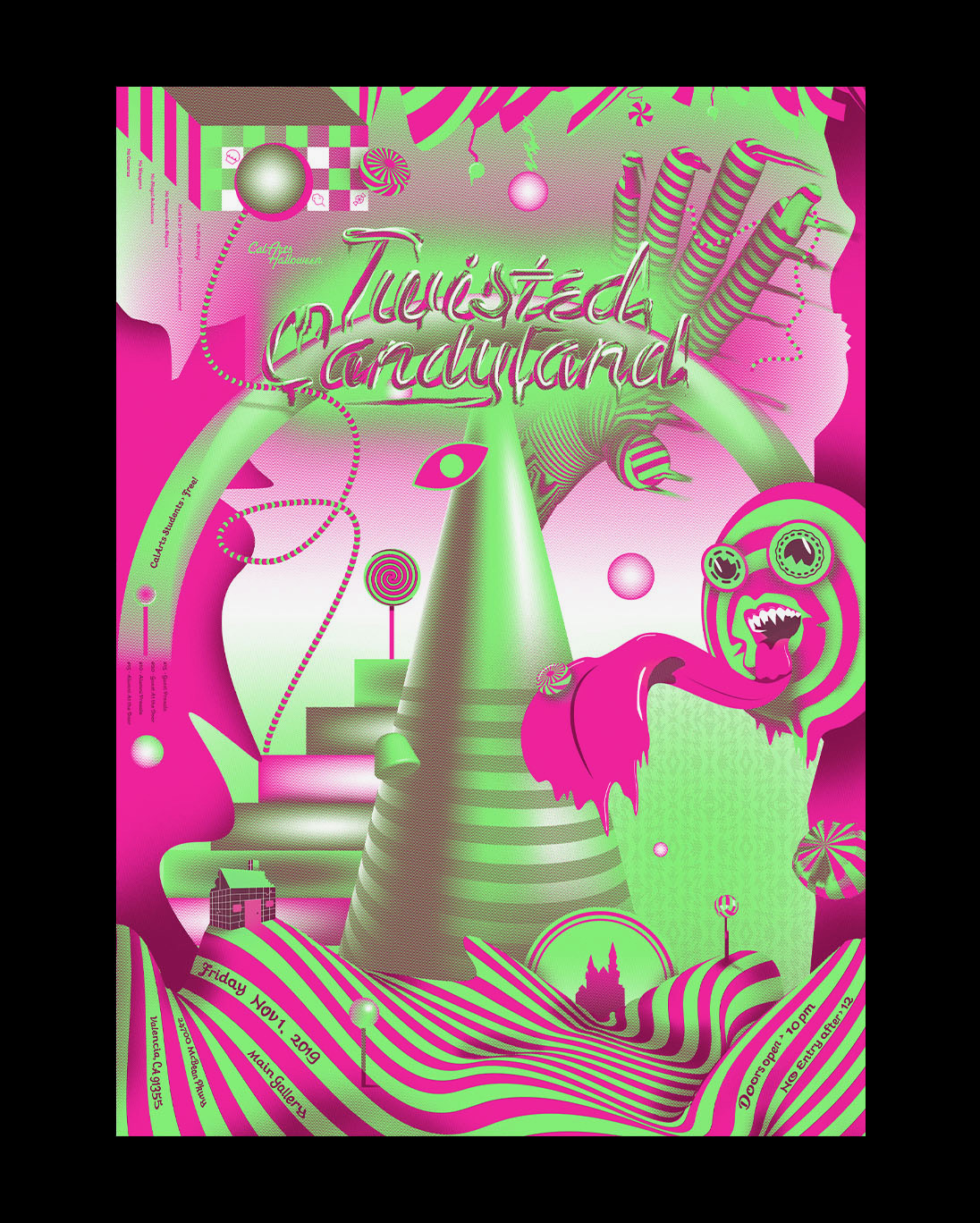 24700: Tell us about the production process.
Alex Cerutti:  In terms of creative techniques, I’m very fond of using an overprint technique where two colors overlap each other to make a third. I should also mention that all of these posters are hand-screen printed. The process is long and very laborious where each color has to be printed individually. It takes hours and hours of work just to print one poster. It’s kind of crazy, but we also love it. This year we’re also doing something different where we’re making a super poster – a poster that is designed using collaged elements from everyone else’s. It’s kind of a surprise and still in the works, so be on the lookout for that too.

Due to their popularity, the Halloween posters tend to go missing from the walls. In order to combat these disappearances, the Halloween committee initiated a campus-wide scavenger hunt with clues leading to poster giveaways.

Check out a slideshow of three more Halloween Posters below: