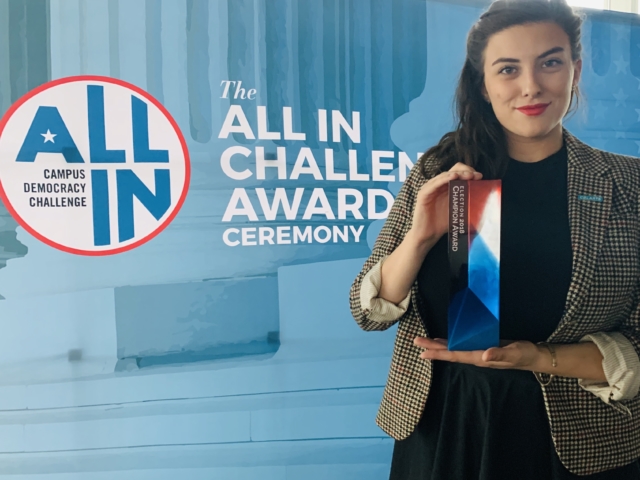 Assistant to the Office of the President Abigail Salling at the ALL IN Challenge Awards Ceremony in Washington D.C.

On Tuesday, Nov. 12, CalArts was among the colleges and universities recognized at the 2019 ALL IN Challenge Awards ceremony in Washington, D.C. The Institute earned three awards from the ALL IN Campus Democracy Challenge for its increase in student voter participation: the Champion Award for most improved student voter rate (awarded to only five participating schools out of 566), the Platinum Seal for achieving a voter rate more than 50 percent (awarded to only 61 participating schools) and a Best in Class Award for overall most improved voting rate at a small, private participating institution.

Established in 2016, The ALL IN Campus Democracy Challenge is a national initiative encouraging higher-education institutions to increase nonpartisan democratic engagement through full student voter participation. By helping students form habits of active and informed citizens, the challenge seeks to make democratic participation a core value of campuses throughout the nation.

“CalArts is proud to receive this national recognition for our efforts,” said CalArts President Ravi Rajan. “As a community of artists, we are committed to engaging the world to reduce apathy, increase engagement, and prepare civic-minded citizens to help solve the country’s, and the world’s, most pressing challenges. In the 2018 elections, CalArts’s students voted at a rate of 10 percent over the national student average, and these awards honor our students’ commitment to participate as agents of change in our democracy.”

ALL IN’s efforts reflect a national trend of increased student voter participation from 2014 to 2018. According to Tufts University’s National Study of Learning, Voting and Engagement, average voter turnout at the more than 1,000 institutions participating in the study jumped from 19 percent to 40 percent. Within this time frame, CalArts’ 2018 voting rate increased from 10.3 percent to 62.4 percent.

Learn more about CalArts’ voting participation and see a full list of winning campuses at allinchallenge.org.