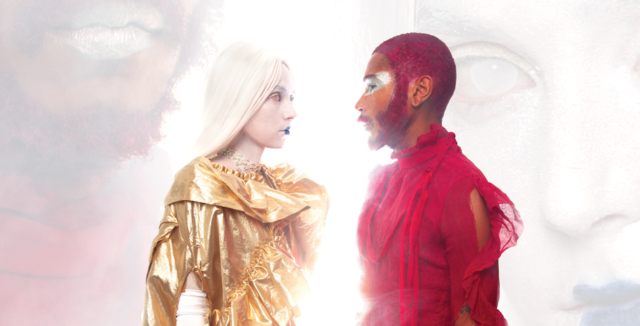 On Saturday, Nov. 16, musician and composer Hunter Hunt-Hendrix enlists CalArtian musicians for the West Coast premiere of his new opera Origin of the Alimonies at REDCAT in Los Angeles.

Origin of the Alimonies is a multidisciplinary opera about star-crossed lovers OIOION and SHEYMN, a “pair of divine beings whose thwarted love tears a wound from which civilization is generated.” The performance boasts video, choreography and a 20-piece chamber orchestra featuring Hunt-Hendrix’s quartet Liturgy and CalArts’ Sonic Boom Ensemble.

Sonic Boom is directed by Ulrich Krieger and Nicholas Deyoe, both of whom are faculty members in the Herb Alpert School of Music at CalArts. Origin of the Alimonies is curated and produced by Lauren Pratt, the associate producer for music at REDCAT, and the School of Music.

Liturgy, which Hunt-Hendrix established in 2005 during his studies at Columbia University, is a Brooklyn-based black metal band that alchemizes various genres into a singular sonic experience. NPR lauded their 2015 album “The Ark Work” as a “radical shift in direction that embraces classical music, glitchy IDM, and even rap … the deeper into it you delve, the more its audacity and imagination start to bloom.” The album was named #1 Avant-Garde Album of the Year in 2015 by both Spin and Rolling Stone. In 2018, the group debuted Origin of the Alimonies in New York with a live orchestra. Hunt-Hendrix recently came to the CalArts campus as a School of Music Visiting Artist.

Origin of the Alimonies LA Premiere