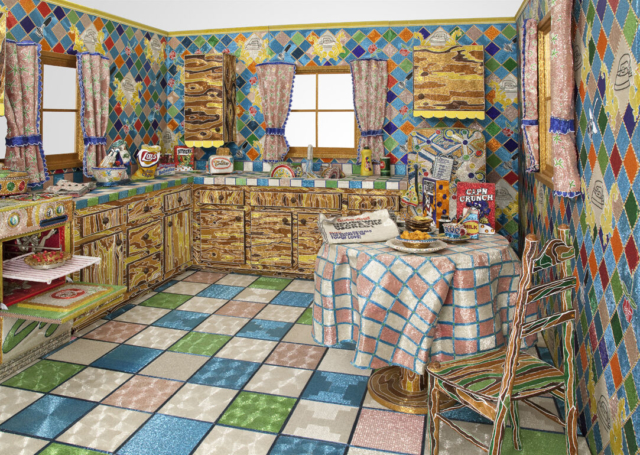 Beginning this month, New York’s Whitney Museum of American Art presents Making Knowing: Craft in Art, 1950 – 2019. This exhibition engages with the materials, methods and strategies of craft. From the description on the Whitney website:

Beginning in the 1950s—at a time when many artists embraced fiber arts and ceramics to challenge the dominance of traditional painting and sculpture—Making Knowing moves through the next seven decades, presenting works that speak to artists’ interests in domesticity, hobbyist materials, the decorative, vernacular American traditions, “women’s work,” and feminist and queer aesthetics.

There are over 80 works featured, ranging across media, textiles, ceramics, painting, drawing, photography, video and large-scale sculptural installation. The pieces are drawn primarily from the Whitney collection and represent rarely seen projects from over 60 artists.

Included among them are members of the CalArts community such as Mike Kelley (Art MFA 78), Kenneth Price, who attended Chouinard Institute in the 50s and Miriam Schapiro, co-founder of the Feminist Art Program at CalArts. This first-of-its-kind program was originally developed by Judy Chicago at Fresno State, but was brought to CalArts by Schapiro in the early 1970s. It aimed to give students a way to bridge conversations about the art world with those on gender inequity and society. Other featured artists in Making Knowing include Anni Albers, Yayoi Kusama, Robert Rauschenberg and Eva Hesse.

“One of the greatest pleasures and responsibilities that comes with digging into the Whitney’s collection is the way it continually compels us to reevaluate our received ideas about taste, style, and even what counts as art at any moment,” comments Scott Rothkopf, Senior Deputy Director and Chief Curator. “By focusing on materials and techniques associated with craft, Making Knowing will offer jolts of surprise, emotion, provocation, and discovery through an incredible range of works, more than half of which have never been on display in our galleries.”

The exhibition is organized chronologically and thematically, beginning with a gallery of works from the 1950s focused on initial engagement with marginalized craft media, challenging traditional ideas of artistic value. Subsequent galleries include:

The Making Knowing exhibition was organized by Jennie Goldstein, Elisabeth Sherman and Ambiki Trasi. Goldstein comments, “Many of the artists in Making Knowing have taken up historically marginalized materials in order to upend hierarchies that have persisted in art history and in museum collecting practices.” Sherman continues, “Together they demonstrate that craft-informed techniques of making carry their own kind of knowledge, one that is indispensable to a more complete understanding of the history and potential of art.”

The Whitney Museum of American Art was founded in 1930 by artist and philanthropist Gertrude Vanderbilt Whitney, and houses a collection of twentieth and twenty-first century American art. The Whitney Museum describes its core mission as an effort to “collect, preserve, interpret, and exhibit American art of our time and to serve a wide variety of audiences in celebration of the complexity and diversity of art and culture in the United States.”

The opening reception for Making Knowing takes place on the morning of Wednesday, Nov. 20, and a number of the featured artists will be present. The exhibition runs until January 2021. Tickets can be purchased online.