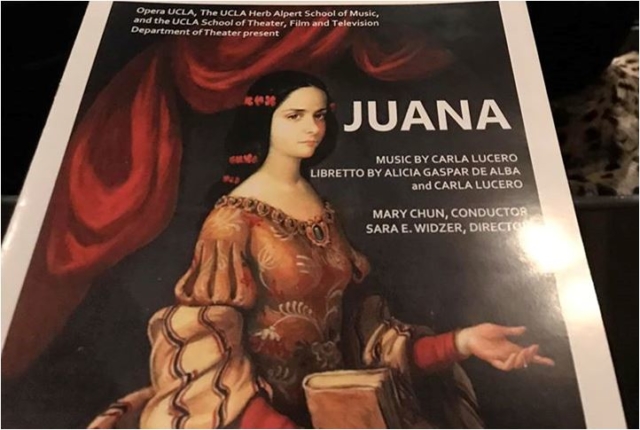 Juana relates the tale of Sor Juana Inés de la Cruz, a Hieronymite nun and feminist scholar in 17th century Mexico City whose daring brilliance in poetry and the sciences earned the admiration — and eventual ire — of the Spanish court. The production comes on the heels of a renewed interest in the once-forgotten figure, including a 2016 Netflix biopic series.

Lucero’s work is based on the 1999 novel Sor Juana’s Second Dream by Alicia Gaspar De Alba, with whom Lucero co-wrote the libretto. Renowned opera vocal and diction coach Lucy Tucker Yates lent her talents to the production. Tucker Yates, who is married to CalArts President Ravi Rajan, currently serves at UCLA’s Herb Alpert School of Music in the Voice and Opera program, and as a production dramaturg and language coach at the New York City Opera.

For Lucero, Juana is a labor of love. She already had wanted her second opera (her first, Wuornos, portrayed serial killer Aileen Wuornos) to be about Sor Juana when she discovered De Alba’s novel in 2002. The project has been a 17-year effort, with interruptions for other work. The score offers an occasion for the Bay Area composer to incorporate what might seem contradictory strengths: a background in the avant-garde at the California Institute of the Arts, work in television and film, along with — as a Latina herself — an abiding interest in indigenous Mexican music.

Lucero was admitted to CalArts in 1986 as a piano major, but quickly found her passion for composition and was accepted to the composition program in her second year. She studied under former music faculty members Rand Steiger, Morton Subotnick and Leonard Rosenman. She is the 2019 recipient of an Opera America Discovery Grant from the Opera Grants for Female Composers program. Lucero currently serves as faculty at the Academy of Art University in San Francisco.

She already has set her sights set on another project titled touch, based on the life of author and activist Helen Keller.