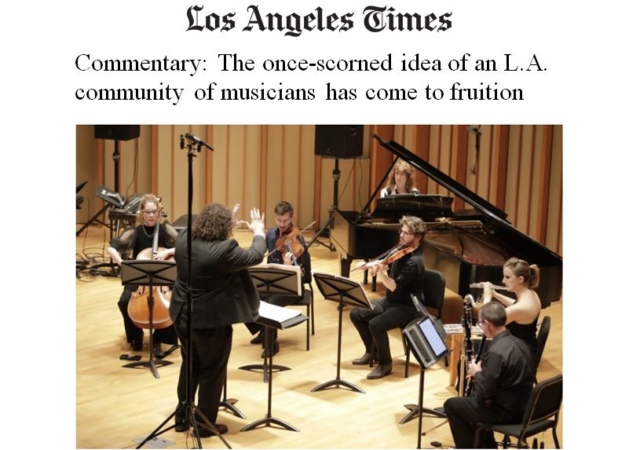 In a recent article, Swed traces the evolution of LA’s music scene from 1987, when Ernest Fleischmann, then-head of the LA Philharmonic, called for the end of orchestras. The visionary impresario urged musicians instead to form larger musical communities to “take on a variety of musical tasks throughout their towns.” In vein with CalArts’ collaborative and community-centric ethos, alums are strongly represented among the current wave of musicians bringing Fleischmann’s vision to fruition through building communities of musicians.

The connections mentioned in the piece are just a sampling of CalArts’ network, which reaches far and wide:

2019 Pulitzer Prize-winning composer Ellen Reid (Music MFA 11), a frequent collaborator of The Industry, was also noted for her achievements. Recently named one of Lincoln Center’s “Emerging Artists,” Reid’s 15-minute “Petrichor” was commissioned by the Los Angeles Chamber Orchestra, where she serves as a composer-in-residence. She has also been commissioned by the Los Angeles Opera and the Los Angeles Philharmonic (twice last season). In November, Pasadena Symphony Music Director David Lockington opened his program at the Ambassador Auditorium with Reid’s “Petrichor,” and closed it with work by Arturo Márquez’s (Music MFA 90) “Danzón No. 2,” played by fellow CalArts alums.