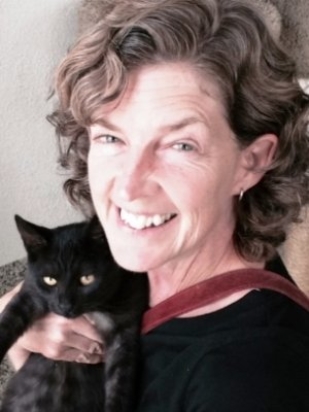 A memorial exhibition of the photography of Denise “Dee” Williams (Art MFA 02) will be held from Friday, Dec. 27 to Sunday, Dec. 29 at as-is.la, a contemporary art gallery in Los Angeles.

Williams passed from cancer on Christmas Day 2018 at the age of 57. A year later, a memorial exhibition of her photographic series Los Angeles Streets illuminates Williams’ striking shots of the city as it transformed in the wake of the Great Recession. As-is.la gallerist Tom Jimmerson opens up the main gallery for the tribute show from noon to 5 pm throughout the exhibition’s brief run, which runs concurrently with the final days of LA-based painter Takako Yamaguchi’s New Paintings exhibition.

The Los Angeles Streets series is a work using black and white film to depict the urban space of Los Angeles since the downturn of the economy in 2007. Billboards, signs, and posters reflecting social values are shown in shop windows, on parking lots, and around freeways. The silver gelatin photographs depict expansive, visually emphatic, and occasionally empty places in downtown and the suburbs.

Williams, a Los Angeles-based artist and educator, explored the relationship between photography and history through carefully composed time- and site-specific photographs. From 2012 to 2015, Williams served as a trustee to the Michael Asher Foundation, of which she was a founding board member. Her writings have been published in magazines like the Australian Centre for Photography’s Photofile, Die Hausfrau and Zitty Magazine. Vogue Italia named Williams an “artist to watch” in its February 2005 issue.

In addition to The Reman Hort Mann Foundation Grant, Williams was the recipient of a 2004 Durfee Foundation Artist Resource for Completion Grant, as well as a scholarship from the German Academic Exchange Service (DAAD) in Berlin from 2000-02.

Those who knew Williams are invited to participate in an informal gathering for remembrances on Sunday, Dec. 29 from 3-5 pm at the gallery.