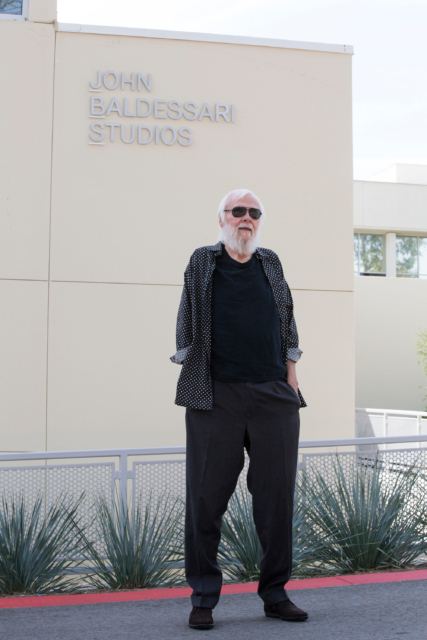 A founding member of CalArts faculty, John Baldessari died on Jan. 2, 2020. Here is a photo of the artist in 2015, at the dedication of the John Baldessari Studios at CalArts.

“Trailblazer,” “a gentle giant,” “witty,” “a fountain of creativity,” these are some of the words from around the web, describing the late artist John Baldessari, who died at the age of 88, on Jan. 2.

As one of CalArts’ founding faculty members, Baldessari’s legacy and influence reaches far and wide. He was a radical and influential teacher, who, according to The New York Times, liked to tell students, “Don’t look at things — look in between things.” And in the obituary in the Los Angeles Times, Lisa Wainwright, a professor at the School of the Art Institute of Chicago, said, “He had the idea that art school is about free play, that it’s about unfettered experimentation that issues creative propositions…Everything was possible and anything goes.”

Many of his admirers, peers and students — including CalArtians Tony Oursler (Art BFA 79) and Michael Jang (Art BFA 73) — have also taken to social media to express their sorrow and respect for Baldessari. Below are some of their posts:

#johnbaldessari #goat 💋 this photo is from his last opening in NYC May 4 2018 the work was sublime. A fountain of creativity, always with a smile and obscure joke. He once curated a show titled God and there were more than a few jokes about bearded men in the sky. Here he looks like the GOAT.

Alex had the good fortune of meeting and shooting John Baldessari in 2011 and since has shared every work in progress with him. He was a generous mentor who constantly encouraged community among artists in Los Angeles. His work shaped the art world and he will be a forever staple of the city. He will be missed. . . . . . . #johnbaldessari #alexprager

RIP #JohnBaldessari, whose work helped shape not only Los Angeles but the modern art world at large. Seen here is his photo series Some Rooms (1986), from our permanent collection ❤️ pic.twitter.com/NTKBdDsITH

With heavy hearts, we mourn the passing of #JohnBaldessari, a wonderful artist, a dynamic and influential teacher, and a man who was essential to the development of contemporary art in LA and the wider world. Seen here are 3 pieces from our holdings of 40+ Baldessari works. pic.twitter.com/73iak9NKw7

“I could never figure out why photography and art had separate histories. So I decided to explore both.” -John Baldessari
‌
In memoriam of the conceptual artist, who passed away yesterday at the age of 88. 💙 https://t.co/Y096rNjPLJ pic.twitter.com/OTwrFymkvw

RIP John Baldessari – a fixture on the Los Angeles art scene, an influential teacher, an absolute legend…and one of the few contemporary artists to appear on The Simpsons pic.twitter.com/3OtjitSnEk