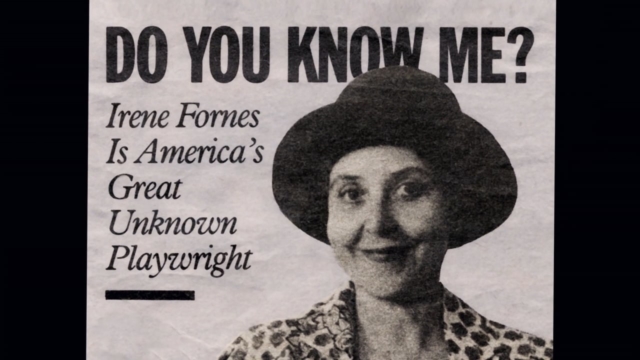 On Monday, Jan. 13, CalArts Center for New Performance / Duende CalArts screens The Rest I Make Up, an award-winning documentary about the life and work of the late Cuban American playwright Maria Irene Fornés. Despite suffering from Alzheimer’s, Fornés offers poignant reflections on her artistic life and achievements in the film, which was directed by Michelle Memran. The Rest I Make Up also features archival footage, interviews and commentary from Edward Albee, Ellen Steweart, Paula Vogel, John Guare, Oskar Eustis and Migdalia Cruz.

Maria Irene Fornés has been called the greatest and least known dramatist of our time. She wrote over 40 plays, won nine OBIE awards, and mentored thousands of playwrights across the globe. Her epic What of the Night? was a finalist for the 1990 Pulitzer Prize. Theater luminaries such as Tony Kushner, Caryl Churchill, Paula Vogel, Lanford Wilson, and Edward Albee have credited Irene as an inspiration and influence. ‘Her work has no precedents; it isn’t derived from anything. She’s the most original of us all,’ said Lanford Wilson. Paula Vogel contends, ‘In the work of every American playwright at the end of the 20th century, there are only two stages: before she has read María Irene Fornés and after.’

The screening event takes place as part of Celebrando Fornés, a year-long event among colleges, universities and theaters in the United States to raise awareness of Fornés’ impact on theater and to preserve the legacy of her work.