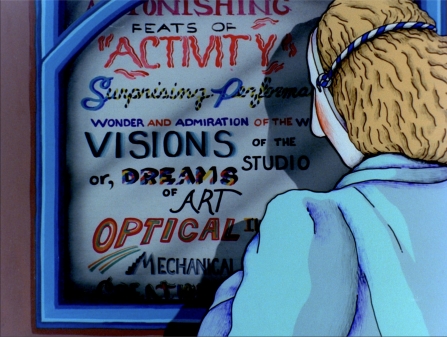 Suzan Pitt’s ‘Asparagus’ is part of a special screening at REDCAT that pays homage to the late artist. | Still courtesy of the Estate.

On Monday, Jan. 20, Film at REDCAT presents Homage to Suzan Pitt, a special screening featuring many of the late experimental animator’s most important films. The program includes Asparagus (1979), Joy Street (1995) and El Doctor (2006), among others. Following the screening, several speakers will take the stage to honor and celebrate the life and work of Pitt, who passed away in June 2019.

A visionary artist and influential CalArts faculty member, Pitt is remembered for her decadent, psychedelic, painterly style that bears the mark of her lifelong travels between the U.S., Mexico and Europe. She received a Guggenheim Fellowship, a Fulbright Scholar Award, three National Endowment for the Arts Fellowships, and a Rockefeller Fellowship. Pitt taught at Harvard University and the Minneapolis College of Art and Design prior to becoming faculty in the CalArts Experimental Animation Program, where she taught from 1998-2017.

Pitt’s seminal hand-drawn work, Asparagus, premiered in 1979 at the Whitney Museum. For two years, it played as an opening film in screenings of David Lynch’s Eraserhead (1977).

From the REDCAT press release:

‘Asparagus from seed is a very primitive vegetable going back to the time of the dinosaurs. It comes out of the ground as a phallic stalk, pointy and purple green, the essence of a beautiful masculine form. As summer passes it stretches tall and becomes a delicate fern, seen on roadsides tilting in the wind, the essence of the feminine like long strands of tangled hair in the breeze. I thought of it as a beautiful symbol of sexuality. From that I made a visual poem about the creative process, taking the role of the magician/artist as the protagonist who ushers the viewers through her search for the essence of the creative forces that rule and drive our existence.’ – Suzan Pitt

Watch a trailer for Asparagus below: