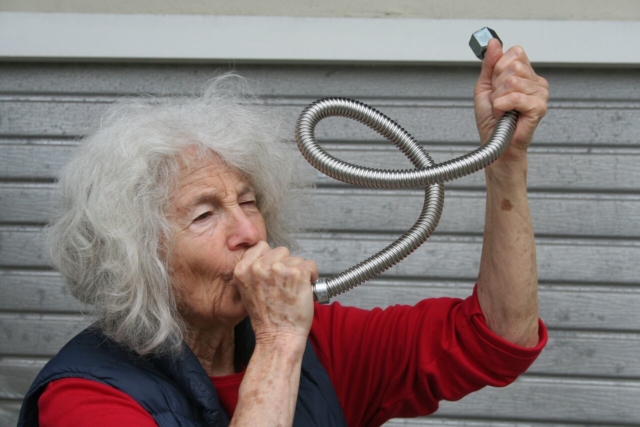 On Friday (Jan. 31) experience an evening of overlapping sounds and sights at the Los Angeles premiere of Al Di Là, a series of works by renowned artist Simone Forti at REDCAT.

Known primarily for her innovations in postmodern dance and choreography, Forti explores the audio-visual component of her practice in this latest series. The performance provides a survey of Forti’s works spanning more than five decades, arranged and performed by the artist alongside LA-based composers Tashi Wada, Julia Holter (Music-IM MFA 09) and Corey Fogel (Music MFA 04), as well as School of Music faculty Jessika Kenney.

Forti is a dancer, choreographer, writer and artist whose works have been described by The Wire as “simple, eccentric, and beautiful oddities [that] paint a picture of an artist working handmade miracles with her own unique curiosity.” The Italian-born, LA-based artist is celebrated for her mastery of improvisation and innovation in the American modern dance tradition. She has performed and exhibited in countless venues around the globe, including the Los Angeles Museum of Contemporary Art (LACMA), Centre Pompidou in France, The Getty Center in Los Angeles, Kunsthaus Zürich in Zürich, Hauser & Wirth in London, Teatro Vascello in Rome, Sogetsu Museum in Tokyo and the Festival de Danza Postmoderna in Caracas, Venezuela.

Forti is the recipient of numerous grants and awards, including a 2014 Movement Research Gala Honor, a 2011 Yoko Ono Lennon Courage in the Arts Award, a 2008 CHIME (Choreographers in Mentorship Exchange) Grant and a 2005 Guggenheim Fellowship, as well as multiple fellowships (both individual and choreographer fellowships) from the National Endowment for the Arts.

The Al Di Là program includes works like Face Tunes, a score synthesized by the contours of human profiles, and Censor, during which “full-out singing” competes with “pan-full-of-nails” percussion.

See the full program below: