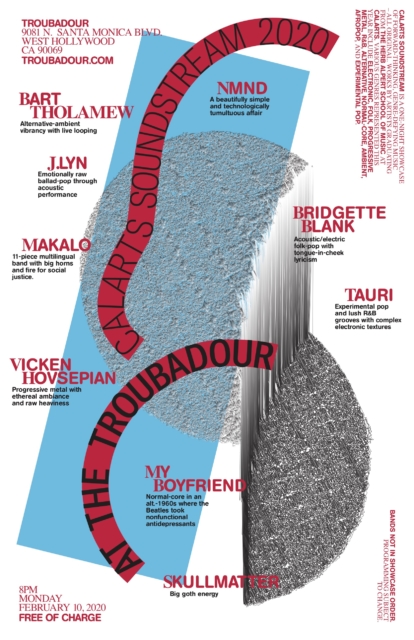 CalArts students perform at The Troubadour on Feb. 10.

In recent years, it’s been tradition for graduating artists from The Herb Alpert School of Music at CalArts to perform a one-night showcase at the historic Troubadour music club in West Hollywood.

On Monday night (Feb. 10), CalArts students join the club’s roster of legendary troubadours who’ve played at the historic club (think Bob Dylan, Elton John, Joni Mitchell, et al.) The annual Soundstream 2020 concert presents a variety of nine forward-thinking, genre-defying musical acts, each of whom will perform original music. The show begins at 8 pm and is free and open to the public.

NMND
Mclean Macionis and Mana Contractor perform as the electro duo NMND. They weave emotional narratives through unconventional, cross-genre and found sounds. NMND’s first EP, Integration, centers around the evolution and manipulation of the human voice. Listen to their demo on Soundcloud.

“Time 2 Kill” is out now!!! Let me know what you guys think of this one. We had a lot of fun making it 😘🍰💅🏼💓 . Written by @new.static , @lizgavillet , and Tauri Produced by Alex Monasterio Artwork by Alex Monasterio Mixed and Mastered by @john_baffa at TV Tray Studios

My Boyfriend
Inspired by The Beatles on “nonfunctional antidepressants,” My Boyfriend embodies the playful yet earnest spirit of pop music. The ensemble is led by instrumentalist and composer Jon Paul Arciniega, with drummer Andrews Arciniega, pianist Morgan Jones IV, bassist Josh Turner, and Mandy Hong and Sü Ozcan on backup vocals.

Skullmatter
Producer and DJ, Skullmatter combines gothic overtones with vintage soundscapes. According to the program, “his tracks aim to bring euphoria back into our lives in the darkest and deepest form, a reminder that everything will be alright in a noisy world.” The man behind Skullmatter is CalArts student Oliver Jung. Listen to LDR Heroin (Skullmatter remix) on Soundcloud.

A sample of tracks by several of the artists performing in Soundstream 2020 are available to stream on a Spotify playlist.