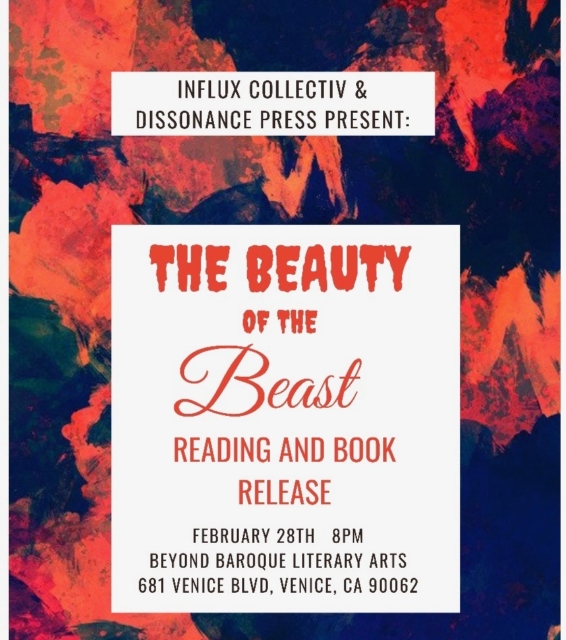 The Beauty of the Beast celebrates a new collection of work from queer writers | Image: Cori Bratby-Rudd

On Friday, Feb. 28, Dissonance Press and Influx Collectiv present an evening reading and release party for Under The Belly of the Beast, a new anthology edited by Cori Bratby-Rudd (Critical Studies MFA 19).

Under The Belly of the Beast is the first release from Dissonance Press, a writing platform that fosters modes of writing that creatively stress collaboration, serialization, and creation of shared narrative. From Dissonance Press:

What is Beauty? What makes a Beast? Cori Bratby-Rudd’s Under The Belly of the Beast shatters the fanciful conventions of dehumanization and desire through a collective bombardment of queer writers, trans writers, writers of color—those for whom defining beauty and beast is an everyday battle for survival, identity, and love. Under The Belly of the Beast is no make-believe fairy tale, but something far more brilliant and fantastic: a relentless elegy for the human, authentic, and true.

24700 had the opportunity to chat with Bratby-Rudd about the book and the many hats she wears within Los Angeles’ literary community.

24700: Can you tell us a bit about your role with Dissonance Press?

Bratby-Rudd: Dissonance Press currently has a fairly small team. Unfortunately, part of being a working artist and writer means that I am simultaneously the social media manager, graphic designer, website designer, grant writer and editor, but my official title is Co-founder and Director of Programs.

24700: How did you begin the editorial process for this new anthology? What kind of pieces should readers expect to find in Under The Belly of the Beast?

Bratby-Rudd: I started collecting pieces for this collection like clothing from a thrift store—I would go through my classes at CalArts or through workshop spaces in the community always keeping in mind this body of work that would become Under The Belly of the Beast. I cherry picked things, pieces that would scream, pieces that felt beastly, and pieces that felt they were essentially connected at their core. Conveniently or tragically, it was as though at every workshop, event, etc. I was able to gather another submission—so many queer folks were tearing apart this central, biting, question of monstronsity with a fierce need to reclaim what had been taken through distortion and inaccuracy. Readers should expect to find pieces that make them pause, pieces that grip them under the skin. They should expect words with fangs, words that lacerate and linger. And most importantly, those of us who know intimately what it is to feel alien, or beast, should recognize an intimate struggle to define and redefine what is a monster and what is beauty.

24700: For the launch of the anthology, the press is also partnering with Influx Collectiv — can you talk about how that group and series came to be?

Bratby-Rudd: Influx Collectiv held its first Queer Poetry Reading in November 2018, just a few months after the Lambda Literary Retreat where (Influx co-founder) Catherine Chen and I met. Since then, we have been trying to host readings every month in an effort to promote queer events, and provide a space and platform for queer creators and queer content. Influx is now also run by our collaborator and host Diana Gutierrez.

24700: How involved were you with Influx Collective and Dissonance Press during your time at CalArts?

Bratby-Rudd: If it weren’t for CalArts, I am not sure I would have even created Dissonance Press or Influx Collectiv. Specifically, during my first year at CalArts I applied to Lambda Literary’s retreat for emerging LGBTQ writers and I was shocked when I was selected as a part of their 2018 cohort. I was then even more shocked to find out the cost of attending the program; I wasn’t going to be able to afford to go. Then through some research, pleading, and professor advice, I ended up applying for the CalArts Dean’s reserve funds and other small CalArts grants, and they covered my expenses to attend the retreat wherein I would make essential connections for both the founding of Influx Collectiv and Dissonance Press. Once there, I met Catherine. We were both from LA and recognized a need for a community space where we, and other marginalized writers like us, could meet, celebrate, and uplift each other without having to be selected for a prestigious retreat and pay thousands of dollars — something we knew was inaccessible for many of our community members. And then, at that very same retreat I also met Ryka Aoki who actually had the original idea to create a collaborative writing group and eventually a press, which then became Dissonance Press. Really if it weren’t for CalArts and Lambda Literary I don’t know that either organization would exist as it stands today.

24700: What excites you about the queer poetry community at present?

Bratby-Rudd: My favorite part of the queer poetry community is, first and foremost, the community. I know that sounds redundant however Dissonance Press was born out of a desire to harness the collective strength of marginalized writers by using a sort of collaborative and team structure to create projects. We see this strength and commitment every month at Influx when our performers sell out of their books, when an audience member drives all the way from San Diego to see a performance by a fellow queer, and in the case of Under The Belly of the Beast, when each contributor to this anthology went beyond what was expected of them and tried to help us acquire blurbs, interviews, etc. We are so excited about the potential for publishing to move beyond the trope of the solitary genius and land on something that we feel is one of the strongest parts of this community; our endless commitment and desire to uplift one another.

Copies of the anthology will be available at the release, as well as a raffle featuring some of the best of LA’s queer businesses. Entrance to the event is free-of-cost and begins at 8 pm. More information, including accessibility, is available on Facebook.

The Beauty of the Beast

Under The Belly of the Beast Anthology Release Party and Reading