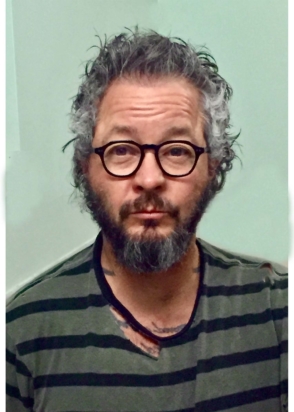 Image courtesy of the artist

“No genre can hold this book.”

Writer Ben Lerner describes Harry Dodge’s My Meteorite: Or, Without the Random There Can Be No New Thing, which debuted on March 17, as “a work of tender force, prying open every category … breathtaking—or breathgiving, because the whole thing oxygenates discourse, makes me feel alive.” Advance notices of the School of Art faculty’s new memoir from Penguin Books called it “riveting,” “captivating,” and “astute.”

Is love a force akin to gravity? A kind of invisible fabric which enables communications through space and time? In My Meteorite, Dodge finds himself contemplating such questions while his father’s dementia advances and he rekindles a relationship with his birth mother. With a meteorite fragment found on eBay as a catalyst, he draws on personal incidents to explore topics ranging from environmental change to the onset of his father’s Alzheimer’s disease. In the process, Dodge questions the seeming randomness of life, finding interconnection, coincidences, and simultaneities in his own experiences and the surrounding world.

Dodge taps into philosophy, literary theory, film, language, and quantum theory, using his knowledge in these subjects as a prism through which to explore events from his life: the illness and death of his father, the discovery of his birth mother who placed him for adoption, life with his wife (Argonauts author Maggie Nelson) and children in Los Angeles, and preparing for an exhibition of his work.

“My Meteorite holds you in its thrall like a brilliant friend—so vulnerable, hot, funny, and casually weird that you don’t notice the profundity until you’re already walloped by it. Dodge juxtaposes the tenderest of human details with hungry, brain-splitting inquiries into the very premise of life, and these shifts in scale are incredibly moving and provocative.”

For readers looking for an alternative point of view during these uncertain times, Dodge offers his meteorite to suggest that nothing is immaterial, and that the world can be a source of wonder and mystery.

As a visual artist, Dodge has exhibited at venues nationally and internationally. His solo and collaborative work is held in numerous institutions, such as the Museum of Modern Art in New York; and the Hammer Museum and Museum of Contemporary Art, both in LA. In 2017, Dodge was awarded a Guggenheim Foundation fellowship.

Hear Dodge read a passage from the book here.