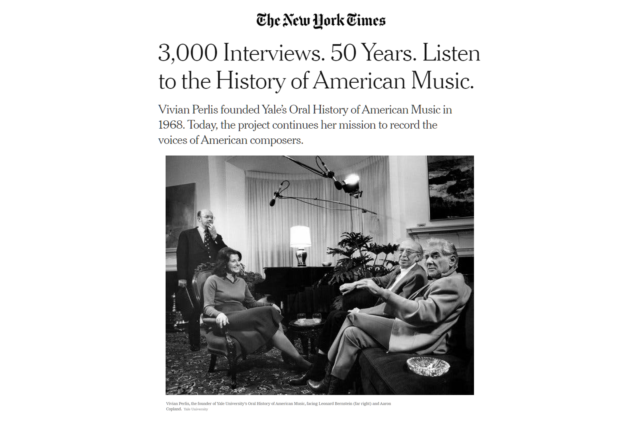 CalArtians are prominently featured in a recent article by The New York Times about reVox, a series of multimedia art installations that remixes oral histories of various musicians and composers, commissioned by Yale University’s Oral History of American Music (OHAM).

Co-curated by Jack Vees (Music MFA 86), reVox melds audiovisual elements with the voice of subjects from Yale’s expansive OHAM archive. The archive, which is directed by oboist and CalArtian Libby Van Cleve (Music MFA 84), currently houses more than 3,000 interviews. Among them are those belonging to luminaries in American music, such as Julia Wolfe, the 2015 recipient of the Herb Alpert Award in the Arts in Music; Aaron Copland; Eubie Blake; Michael Gordon; and David Lang.

Numerous CalArtians were involved in the creation of the reVox pieces. Vees, who serves as director of the Center for Studies in Music Technology at the Yale School of Music, contributed to the project with Placerita. The work was inspired by an audio recording of Vee’s friend Art Jarvinen (Music MFA 81), a longtime faculty in The Herb Alpert School of Music at CalArts, and founding member of the California EAR Unit.

Other CalArtians involved in the project include:

reVox marks the 50th anniversary of OHAM, which was founded by pioneering musicologist Vivian Perlis. Van Cleve assumed the post when Perlis, who passed last year, retired in 2010.

Of gathering information from composers through oral histories, Van Cleve was quoted in the article: “It needs to feel like a conversation, with the flow and the ease and the informality, but it has to not be a conversation. It’s not equal.”

Prior to the coronavirus outbreak, OHAM had planned anniversary celebrations including an exhibition, a public interview with Julia Wolfe, and the reVox installation. OHAM recently launched “Alone Together: Musicians in the Time of Covid,” a series of brief interviews with musicians about their experiences during the pandemic.

Check out the playlist here.