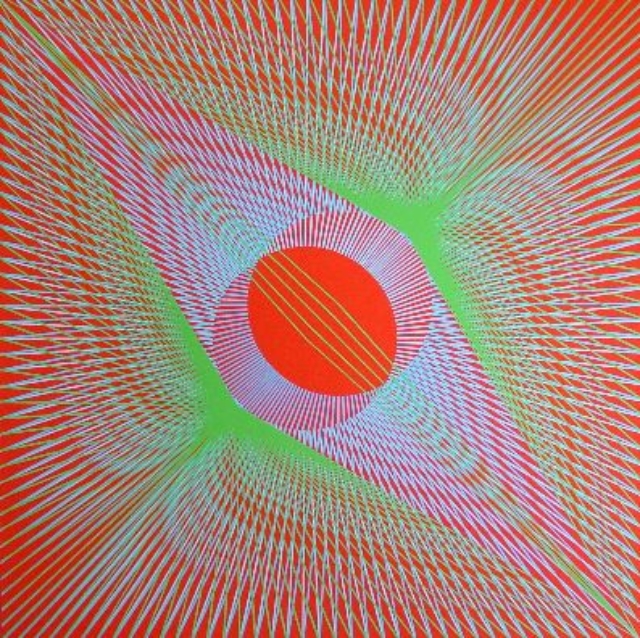 A print by Chouinard alum Gene Gill. | Image: Courtesy of the artist.

Teaching art and making art have been Gene Gill’s passions for most of his life. With a knack for drawing as a young boy, Gill grew up in Memphis, Tenn., and enrolled at Chouinard Art Institute in 1958 after four years in the Navy. He joined the military so that he could take advantage of the G.I. Bill, the program created in 1944 to support higher education for veterans. “Though I didn’t think so at the time, my family was poor,” he says. The grants provided by the G.I. Bill were the only way he could afford Chouinard, which a few years later would merge with the Los Angeles Conservatory of Music to become CalArts.

“The students loved Chouinard,” says Gill, who at 86 still has a slight Tennessee accent. “We all knew something big was happening there.” Indeed, in the late ‘50s and early ‘60s, Chouinard launched the careers of many artists who helped establish or advance international art movements such as Finish Fetish, assemblage, and Light and Space. “I became a totally different person at Chouinard,” Gill says. “I saw art differently. I became interested in everything.”

To make ends meet, Gill worked at The Broadway department store in Hollywood every night until 10. “It got to a point where I couldn’t handle both school and work, so I stopped going to class,” he says. One of his teachers, Don Graham, found out that he was on the verge of quitting and summoned Gill, convincing him to return and finish his degree. “He believed in me, and I needed to know that,” Gill says.

Even before he began art school, Gill says that he planned to become a teacher. Almost at the start of Chouinard, he says, “in every class I would think, ‘how would I teach this?’ I casually thought that if I could also make it as an artist, I would switch to ‘artist/teacher’ and possibly phase out ‘teacher,’ but I sincerely liked teaching. Even when I began having some success as an artist, it remained ‘teacher/artist.’”

After graduating Chouinard in 1962, he spent a year taking education classes before beginning his career teaching high school art, first in Gardena, Calif., for five years, and then at Reseda High in the San Fernando Valley, where he taught for two decades.

Gill was the first art instructor for many of his students from Reseda, a working class community. He opened their eyes to the possibilities of turning their raw art talent into a profession. “None of my students thought that art could be a career until I taught them,” Gill says. “I was the first teacher in California to teach AP art. It felt so good when I’d see these kids improve,” he says. “It made me feel like I was doing something worthwhile.” Many of his students went on to study art in college, and while he would have liked some to have studied at CalArts, most chose state schools because of financial constraints.

While teaching, Gill worked on his own art at night, and in the ’70s he began extensively exhibiting complex geometric paintings. Shortly before he retired in 1988, he began constructing miniature replicas of historic buildings. While Gill first designed these exquisitely detailed miniatures as Christmas tree decorations, he soon got serious about them. For more than three decades, he has travelled around the world (including 65 trips to Europe), seeking out specific buildings so that he could sketch and photograph them as source material.

The miniatures, including landmarks such as the Taj Mahal, Westminster Abbey, and the Sydney Opera House, are constructed out of a variety of materials, including wood, Sculpey clay, and styrene. One of his proudest moments was exhibiting them in a solo show at the Reagan Presidential Library in 2000.

Gill still keeps in touch with some of his students, and has never forgotten the importance of arts education. Although he has never visited the campus, he feels strongly about the Institute’s mission and its history, carrying forward the Chouinard legacy of fostering creativity and experimentation in the arts.

He’s creating the Gene Gill Scholarship at CalArts through an estate gift, supporting students with financial need with a preference for art students. “I wasn’t able to financially help students before, when I was teaching,” he says. “Now I can give some students the ability to study art in college. I’m very pleased to do this.”

“Art has been my life, and I want to do something for art.”

Gifts like Gill’s ensure that future students are afforded the same life-changing education that he received at Chouinard, and CalArts is grateful for his inspiring and impactful gift.