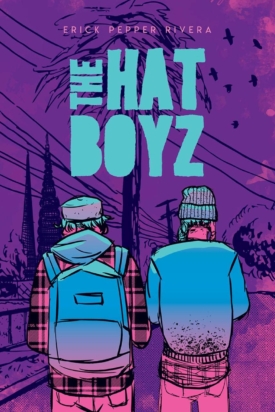 CalArts alum Erick Pepper Rivera (Music BFA 12) is a composer and cartoonist who released his debut graphic novel The Hat Boyz in 2019.

The book follows Benny, a half-black, half-Mexican teenager who has a hard time avoiding the drug scene and crime from his South LA neighborhood. It also examines the relationship between a historically underserved community and the police.

While promoting the book last fall, Rivera returned to campus to chat about the book, growing up in his hometown of Watts, Calif., and his time at CalArts. Take a listen to his story.

Rivera’s interview also marks the inaugural episode of the 24700 Podcast, capturing stories from all corners of the CalArts community. Future episodes, including special series, will be released on a biweekly basis.