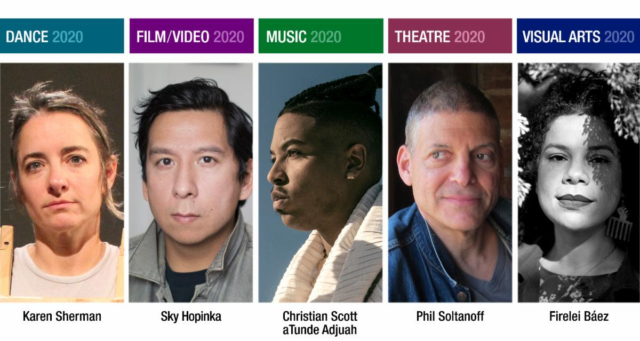 Headshots of the 2020 Herb Alpert Award in the Arts winners. Photo Credit: Courtesy of the artists.

On Friday, May 22, the Herb Alpert Foundation announced the recipients of the 2020 Herb Alpert Award in the Arts (HAAIA). Administered by CalArts since 1994, the awards recognize five mid-career artists pushing the boundaries of Dance, Film/Video, Music, Theatre, and Visual Arts. Each honoree receives an unrestricted grant of $75,000.

“We are grateful to be able to celebrate the Herb Alpert Awards’ 26th anniversary during this very challenging year, where more than ever the arts are a vital and necessary way of bringing sustenance, meaning and well-being to our world,” said Herb Alpert Foundation President Rona Sebastian. “In recognizing and honoring these five visionary mid-career artists who expand their fields as well as our own horizons, we acknowledge the profound social, cultural and personal impact their work, and the arts overall, has on a civil society … and particularly a civil society in the midst of crisis.”

Sherman is a Bessie Award-winning multidisciplinary artist whose inclusive dance practice and works have been presented in numerous performances and venues throughout the US. She was selected by the dance panel for her “genuine, transparent, vulnerable work and the ways she summons the real into existence.”

Hopinka is a filmmaker whose works profess a “remarkable approach to storytelling, at once personal and mythic.” A descendant of the Pechanga Band of Luiseño Native Americans, his filmography reflects his interrogation of ecology and dispossession through a “visual aesthetic that refuses to objectify people or land.” Earlier this year, Hopinka was named the recipient of a 2020 Guggenheim Fellowship.

Adjuah is a three-time Grammy Award-nominated jazz trumpeter, composer, and producer. Known for his immersive and provocative sound, the music panel cited the “inventive ways he decolonizes sound and uses the past to move us forward.”

Soltanoff is a New York City-based theater director selected for the masterful ways in which he “conveys story through silence and physicality” through richly imaginative and playful stage works. Soltanoff was nominated for a 2007 Molière Award, and was the recipient of the 2009 Doris Duke Creative Exploration Fund Award.

Baéz is a visual artist whose intricate paper, canvas, and sculptural works exhibit a “fearless, subversive beauty” as they explore themes of culture and identity through inherited histories. Her artwork has exhibited internationally, much of which features “expansive, color-saturated, highly patterned and ornamented” portraiture of Afrodiasporic subjects.

“The Herb Alpert Award in the Arts stands as one of the most important gestures of support for the incubation of artists globally, and CalArts is honored to work with the Herb Alpert Foundation in administering this award for 26 years,” said CalArts President Ravi Rajan. “CalArts is a community of artists whose mission is to transform ourselves, each other, and the world through artistic practice, and the Herb Alpert Award in the Arts is an important part of fulfilling that mission.”

As part of their Herb Alpert Award in the Arts’ year-long tenure, each of the newly named artists will undertake a visiting artist residency at CalArts’ during the upcoming academic year.