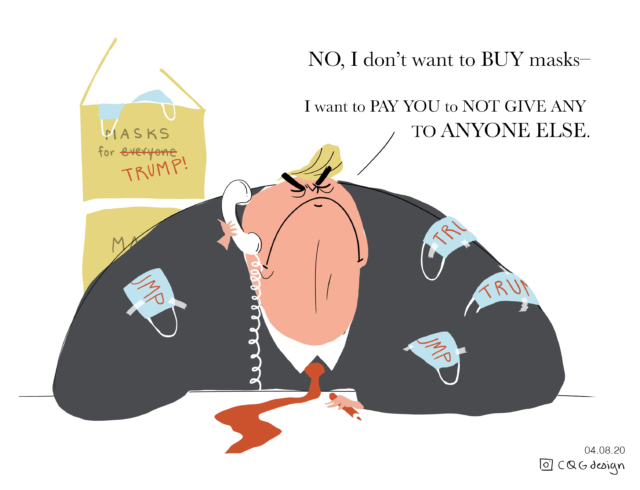 Last week, editorial cartoonist Matt Wuerker interviewed visiting faculty Ann Telnaes (Film/Video BFA 85) for Punchlines, his video series on Politico.com. Telnaes, an editorial cartoonist for The Washington Post, taught the spring 2020 class Commentary Though Cartoons in CalArts’ Character Animation Program. In this segment on the future of the profession, Wuerker noted that Telnaes “has always been on the cutting edge of cartooning and was the first political cartoonist to dedicate all of her work to the online audience.”

For the interview, the two Pulitzer Prize winners discussed how Telnaes’ class may predict the future of the field, how she translated print-based editorial cartoons into online animation, and how the current moment might be a golden age for the profession.

An alum of the Character Animation Program, Telnaes commented, “I’m pretty excited. My class had 13 students in it and 10 of them were women. That is a lot different from when I went to CalArts.”

“Maybe the next generation will be overwhelmingly female?” asked Wuerker. “If my class is any indication,” she affirmed.

Commentary through Cartoons was open to students across the Institute. Telnaes viewed her class as a way to motivate a new generation and bring diverse voices into the profession. She taught students to explore social and political issues using a variety of formats—multipanel cartoon, animation, motion graphics, graphic essays, live-sketching, or the traditional one-panel format. Once CalArts closed due to the pandemic and transitioned to remote learning, Telnaes revamped the class and its content to focus on Covid-19.

To mentor her students during quarantine, she changed the class to one-on-one online meetings. In April, 24700 covered how a Covid-19 related cartoon by Telnaes’ student Erin McDermott (Film/Video BFA 20) was featured in the print edition of The Boston Globe.

In 2001, Telnaes became the second female cartoonist to win the Pulitzer Prize for Editorial Cartooning. In 2017, she received the Reuben Award, thus becoming the first woman to have received both the Reuben Award and the Pulitzer Prize for Editorial Cartooning.  She was the guest of honor at CalArts’ 2018 Producer’s Show. Telnaes’ work can be viewed online at The Washington Post.