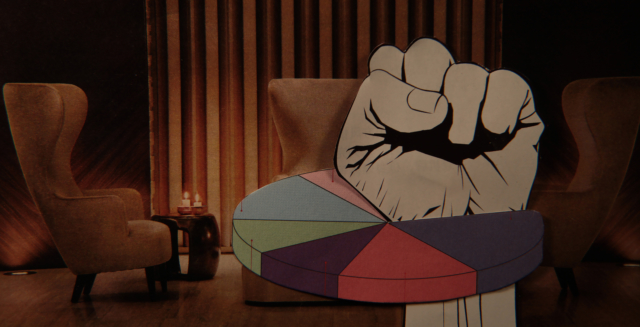 ‘Circumstantial Pleasures’ by Lewis Klahr. | image courtesy of the filmmaker and Wexner Center for the Arts.

Circumstantial Pleasures, the latest film by CalArts School of Theater faculty Lewis Klahr had its world premiere on Feb. 29, 2020, at Light Industry in New York. Soon afterward, theaters were closed because of COVID-19. Rather than wait for the world to reopen, Klahr partnered with the Wexner Center for the Arts in Columbus, Ohio, to stream the movie for free at wexarts.org. It’s available to watch online through June 18.

Klahr, called “one of the most consistently inventive figures in noncommercial American cinema,” by The New York Times, is known for his collage animations that mine the collective unconscious. Circumstantial Pleasures is a feature-length collection of six short films that “captures and crystalizes the unease, ugliness, and inhumanity of contemporary life,” according to the program notes.

From a review of Circumstantial Pleasures in The New York Times:

Each movie has its own texture, vibe, narrative thrust and soundtrack (with music by Scott Walker, among others). There are thematic and visual echoes throughout all six and some share bits and pieces, with zigzagging dots, whirling patterns and moving comic-book figures making repeat appearances. Yet no matter how distinct the elements — and how differently arranged — they are of a feverish, profoundly uneasy piece.

The film features music by Dean of the Herb Alpert School of Music at CalArts David Rosenboom, Tom Reaction, and Walker.

The six short films that make up Circumstantial Pleasures include: