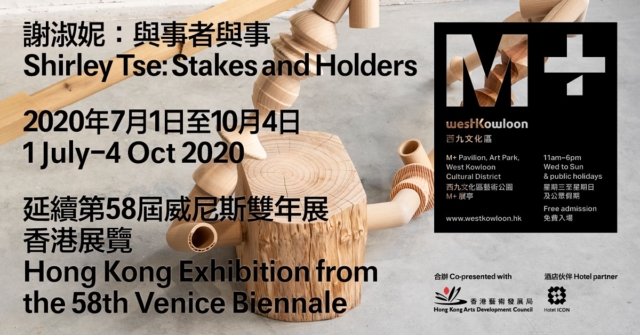 Tse’s sculpture exhibition is a continuation of “her two-decade-long exploration of the manufacture, consumption, and circulation of mass-produced objects, from her use of consumer plastics and polymers in the 1990s and early 2000s to her most recent work with other generic materials and ready-mades.”

The installations feature a variety of contrasting materials and processes such as wood, plastics, and objects such as sports equipment, as well as 3D printing, turning on a lathe, and radio transmission. Tse’s use of sculpture “addresses the concepts of agency, negotiation, and connection in a pluralistic world, drawing on both histories and imaginations,” according to the program.

In an interview with CoBo Social, Tse discussed the need to be flexible with her work since she was unable to travel to Hong Kong due to COVID-19 restrictions:

I think most people are uncomfortable with, if not anxious about, uncertainties. This is the mode of thinking and being that my art practice has led me to, namely: plasticity, malleability, and the non-predetermined. These have guided my philosophy and are more relevant now than ever before.

Born in Hong Kong and based in Los Angeles, Tse has been a CalArts faculty member since 2001, and was recently named the Robert Fitzpatrick Chair in Art. She is known for her sculpture, installation, and photography, which have been exhibited worldwide. In 2012, she received the California Community Foundation Fellowship for Visual Arts, and in 2009 she was awarded a John Simon Guggenheim Foundation Fellowship.

Check out a video about Tse’s Stakeholders in the 2019 Venice Biennale below: