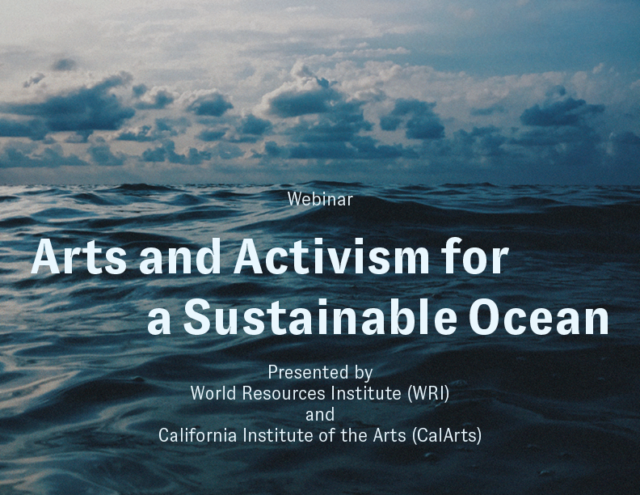 On June 29, creative solutions to the oceans in crisis were showcased in “Arts and Activism for a Sustainable Ocean,” a webinar presented by global research nonprofit World Resources Institute (WRI) and CalArts. The innovative artist-activist works were produced by four student teams from the 2019-20 CalArts Collaborates course, a partnership between the Institute and WRI.

During the 2019-20 academic year, CalArts Collaborates: Design for Non-Profit Partners teamed students and faculty from CalArts’ Graphic Design Program, the Program in Film and Video, and Character and Experimental Animation Programs. Each of the four teams addressed distinct ocean issues identified by WRI’s research through their works.

Learn more about each of these student projects in the most recent issue of The Pool:

Project collaborators from both CalArts and WRI were in attendance, including the CalArts Collaborates students, course instructors Maureen Furniss and Yasmin Khan Gibson, and CalArts and WRI leadership. The webinar consisted of videos produced by the four student teams explaining their projects, various speakers, a roundtable discussion, and an audience Q&A.

“Environmental justice is important to many members of our community,” CalArts President Ravi Rajan addressed viewers. “This collaboration has allowed those artists a stronger voice to support their beliefs.”

WRI President and CEO Andrew Steer described the ocean as “one of the most important life-sustaining gifts that we have as humanity” in his opening remarks. “It’s home to more than half of the world’s species, it produces half of the planet’s oxygen that we breathe, and it absorbs a quarter of all the greenhouse gases that we emit. It is profoundly important to life on earth, and yet it is in deep trouble.” Steer further noted issues of overheating, acidification, overfishing, and pollution that currently plague the oceans.

Tim Disney, chair of the CalArts Board of Trustees and WRI Global Leadership Council member, was also in attendance. Disney, who was credited as the catalyst for the WRI and CalArts collaboration, shared his thoughts about the oceans crisis, and the power of the arts to create tangible action:

We have to change the culture. And this is where art comes into play. It’s often said that science creates information, whereas artists create meaning. So we have to come to that meeting point, where we take information and turn it into something that has meaning to people on a very personal level in a very simple way. And I think [the student projects are] a demonstration of that.

Learn more about the 2019-20 CalArts Collaboration course and the webinar here.