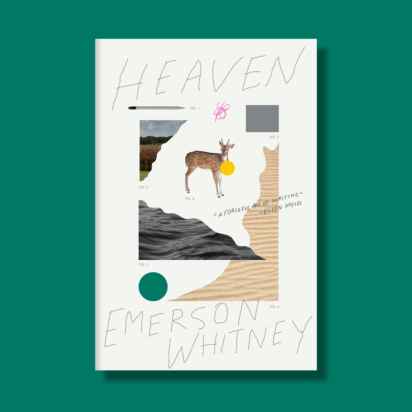 The book diarizes Whitney’s resolve to understand their relationship with their mother and grandmother, and their initial glimpses of womanhood growing up. Through “deeply observant, psychedelic prose,” Whitney folds in ideas from thinkers like Judith Butler, Donna Haraway, and C. Riley Snorton as they “engage transness and the breathing, morphing nature of selfhood.” The account vacillates between theory and memory in an attempt to examine “what makes us up.”

Praised as an “electrifying, gorgeous, defiant” work, Heaven has been named a best book by The A.V. Club, PAPER, Literary Hub, Refinery29, Ms. Magazine, Chicago Review of Books, The Observer, and The Seattle Times.

A starred review from Kirkus Reviews noted: “An incisive, nuanced inquiry into gender and body.” The Seattle Times cited the author’s ability to make the reader “think about what we are underneath false binaries and the performance of self.”

For every copy of Heaven sold in July, publisher McSweeney’s donated $2.50 to Gender Justice LA (GJLA). A matching grant of the funds raised will be donated to Black Trans Advocacy Coalition in Dallas.

Check out exclusive excerpts from Heaven on The Cut and The Paris Review, and order the book at McSweeney’s online store.

Whitney is a poet and author of Ghost Box (Timeless Infinite Light, 2014). They were a 2015 REEF artist in residence, and was among several CalArtians participating in the immersive performance event One House Twice in 2017. Whitney’s work has appeared in various publications, including Troubling the Line: Trans and Genderqueer Poetry and Poetics, Bombay Gin, and Jupiter 88. They currently serve as a faculty member in the creative writing program at Goddard College in Vermont, and is a postdoctoral fellow in USC’s gender studies program.