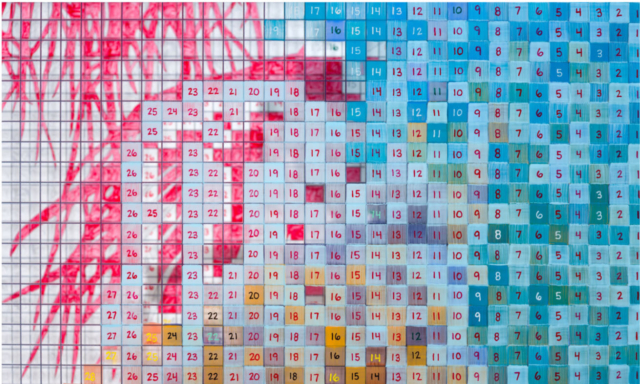 Numbers and Trees is a continuation of Gaines’ critically admired exhibition Charles Gaines. Palm Trees and Other Works, presented in 2019 by Hauser & Wirth Los Angeles. Created in a similar manner with gridded tree formations of acrylic and Plexiglass, Gaines evolves the methodical system employed in his previous works. The “successive modification to scale, color, and background” in the new works support his claim that although “the system has never changed, the outcome is always different.” Each of the exhibition works are titled as the state in which the featured palm is native flora.

Images of trees took root in Gaines’ works in the mid-1970s, first appearing in Walnut Tree Orchard (1975–2014), which also features a numbered grid system. A later tree-centric series, Numbers and Trees (1986), is the genesis of this most recent palm trees exhibition.

Naima J. Keith, vice president of Education and Public Programs at LACMA and curator of his 2014 survey exhibition Charles Gaines: Gridwork 1974–1989, commented on Gaines’ process in the official release:

Charles continuously challenges himself to maintain a systematic approach to producing works of art, and because of his willingness to push the algorithm ever so gently each time–whether that’s with scale, the background image, or color–artists, curators, and viewers know he is still committed to working in a certain way, but is open to taking on more risks as his practice grows and as he grows as an artist.

Check out the online exhibition, which launched Aug. 17, on the Hauser & Wirth website.

Gaines’ works will also appear in the upcoming February 2021 exhibition New Work: Charles Gaines, hosted by the San Francisco Museum of Modern Art (SFMOMA). The multimedia installation emerged from the artist’s research into the Dred Scott Decision of 1857, which proclaimed Black people were not US citizens and thus barred from rights granted by the Constitution.

The artist has had more than 80 solo shows and numerous group exhibitions around the globe, including the 2007 and 2015 Biennale di Venezia. Last year, Gaines was named the 2019 recipient of the Edward MacDowell Medal in the Arts.