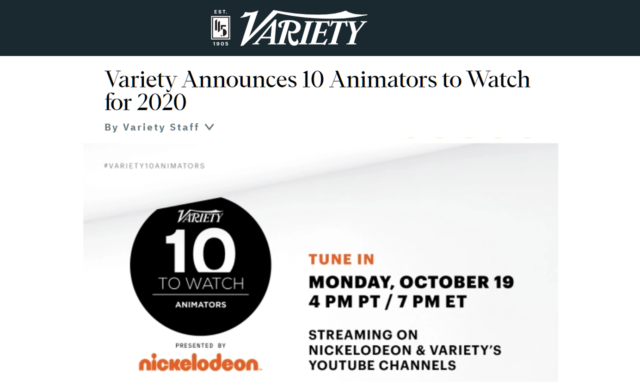 Ford, based in Los Angeles, is currently working as a storyboard artist, writer, and voice actor on the Cartoon Network series Craig of the Creek. Myers is a New York-based character designer whose projects include Netflix’s upcoming musical adventure Over the Moon, directed by fellow CalArts animator Glen Keane (Film/Video 74).

Gutiérrez’s award is attributed to his work on the critically acclaimed fantasy adventure Book of Life (2014) and the upcoming Netflix series Maya and the Three, the latter slated for release in 2021. Variety’s Executive Vice President of Global Content Steven Gaydos described Gutiérrez as “one of the most exciting voices in the animation space whose impact in the industry can be felt by anyone who has worked with him.”

Work from the aforementioned CalArtians and other honorees will be featured in an hour-long Nickelodeon special on Monday, Oct. 19, to be livestreamed on both the Variety and Nickelodeon YouTube channels.

“We are so excited to continue our partnership with our friends at Variety to celebrate animation and the wonderful talent being honored this year,” said Ramsey Naito (Art MFA 95), the newly named president of Nickelodeon Animation. “The world is changing, the landscape is changing, and we all continue to evolve and change with it, and this year’s event will express the ultimate level of creativity and passion that goes into this beloved medium we call animation.”