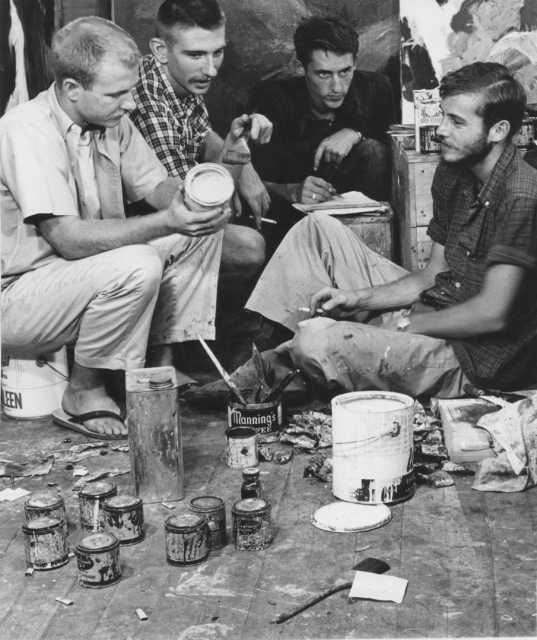 In the late 1950s, when Jerry McMillan (Chouinard 60) was driving with Ed Ruscha (Chouinard 60) from Oklahoma to the Chouinard Art Institute, McMillan distinctly remembers the moment that they were getting close to Los Angeles.

The scent hit him.

“I had never smelled anything like it before,” McMillan recounted. As it turned out, McMillan’s encounter with the city’s infamous mid-century smog was just the first of many new experiences that the budding artist would have on the West Coast over the course of the next few years. For McMillan, it was the beginning of a particularly exhilarating moment, and one that would help to launch his remarkable career and the careers of at least two other major artists of the last six decades.

McMillan and Ruscha were two of a collection of a half dozen Oklahoma-bred student-artists who, in the late 1950s and early 1960s, made their way to LA to attend Chouinard. Their shared experiences—as Oklahomans, as Chouinardians, and as newly-minted Angelenos finding their way in a burgeoning art scene—brought them together and, remarkably, continues to resonate with them today.

An exhibit, OK/LA, highlighting this unique group of highly-successful artists (self-described as “The Students Five”) is now on display at the Fred Jones Jr. Museum of Art at the University of Oklahoma Norman through March 7, 2021.

Ruscha was the first of the group to head west. He originally expected to attend Art Center in Pasadena, but because of a mix-up about when classes began, he ended up at Chouinard instead. A year later he lured McMillian, who he’d known since junior high school, to Los Angeles. A year after that, their friend Joe Goode (Chouinard 61) joined them as well.

“Jerry and Ed had already settled in LA and had come back to Oklahoma to visit family,” Goode recalled. “Ed had been trying to talk me into coming to LA but I just couldn’t decide what to do.”

It turns out that the Southern California weather tipped the balance.

“I was talking with Jerry in his car the night before he was going to head back west,” Goode remembered. “When I said goodbye, the car door wouldn’t open because so much snow had fallen while we were talking. That’s when I decided I wanted to move to LA.”

At first, Los Angeles didn’t seem much different from Oklahoma City to Goode. “They’re both spread out and have lots of suburban housing tracts. But once I arrived and I saw the ocean, I knew I had come to a new kind of place.”

The students (who in addition to McMillian, Ruscha, and Goode, included, among others, Patrick Blackwell, Mason Williams, and Ruscha’s younger brother, Paul) rented a home, first in Hollywood and later in Los Feliz. The focal point of that home was an open-air courtyard that “The Students Five” used as their art studio. This shared space helped them solidify what would become life-long relationships.

“Since we were seeing each other and our work day and night, that kind of fostered a closer bond,” Goode said.

Despite their youth, and the tempting glitz of Hollywood, the students were committed to their work as artists and took their studies at Chouinard very seriously. Their collective intensity also helped to keep each one of them focused as well.

“When I arrived at Chouinard for the very first time,” McMillan said, “I walked into a classroom and saw a student exhibition that completely blew me away. It didn’t seem like student work at all, it was so good.”

The experience of being around each other and so many other artists at Chouinard helped to push each of them to explore and experiment with their own work. But that didn’t prevent them from helping each other out as well.

For example, since Chouinard didn’t offer any formal photography classes, McMillian, who went on to accomplish some of the most groundbreaking photographic work of the last 60 years, first learned how to take pictures from Blackwell, who learned during a stint in the military.

Yet despite their proximity to one another, and the time that they spent together during their formative years, “The Students Five” went on to do their own innovative and unique work—from McMillian’s one-of-a-kind photography, to Goode’s major contributions to the Pop Art movement.

“I was trying to consciously avoid being under the strong influence of anybody,” Goode said. “Originality was key. It’s impossible to say that they haven’t had some kind of influence on my work, but the thing that drives me is making something I’ve never seen before.”

McMillian, Goode, and Ruscha have gone on to influence countless other artists through their work. But the bonds that they first developed at Chouinard and in their shared studio in Los Feliz have lived on for generations.

Learn more about the OK/LA exhibition at the Fred Jones Jr. Museum of Art at the University of Oklahoma.