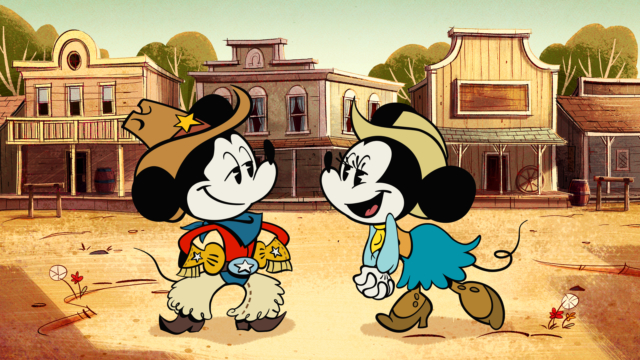 Rudish is the executive producer of the new shorts series, The Wonderful World of Mickey Mouse, which debuts on Disney+ on Nov. 18. The date is a significant one in Disney history: Mickey Mouse made his synchronized sound debut in the short film Steamboat Willie on Nov. 18, 1928, in New York’s Colony Theatre.

The new Disney+ series isn’t Rudish’s first encounter with the popular anthropomorphic mouse. He also served as executive producer on the Disney Channel’s Emmy Award-winning Mickey Mouse, which ran from (2013-2019). Both shows harken back to the character’s early days, sharing a similar style and humor.

When he was first asked to develop Mickey Mouse and The Wonderful World of Mickey Mouse, Rudish didn’t want to completely overhaul the “spunky rascal.” He looked back at all the old Mickey cartoons that he loved from the 1920s and ’30s. “I like the old ‘pie eyed’ design. Those cartoons were so surreal and very physical,” he said. “I think we just do what Mickey was good at originally. I wanted to take a page from Walt’s old playbook.”

It may sound daunting to redevelop a classic character, but not for Rudish—most of the time, anyway. “It felt very natural and comfortable as I was putting pencil to paper, ” he said, describing the process as working in familiar territory with an old friend.

“But when I’d step back, then I’d go … ‘I’m drawing Mickey Mouse. This is so weird. What!?’ Then this wave of reverence would fall over me. This is crazy that Mickey Mouse is on my drawing table.”

Although The Wonderful World of Mickey Mouse is technically CG animation (they use Harmony 2D animation software), the team tries to make the animation seem as hand-drawn as possible for the classic style. “The animators will get in there and tweak things by hand, so it’s not like using Flash and cutout elements.”

Rudish—whose father Rich Rudish was part of the Hallmark team that created Rainbow Brite—attended CalArts with a cohort that included Genndy Tartakovsky (Film/Video 92), Craig McCracken (Film/Video 92) , and Pete Docter (Film/Video BFA 90), among others.

Post-CalArts, Rudish said he and his classmates would often collaborate on each other’s projects, so it’s unsurprising that his own filmography includes various roles on The Powerpuff Girls (created by McCracken), as well as Tartakovsky’s Dexter’s Laboratory, Samurai Jack, Star Wars: Clone Wars, and Sym-Bionic Titan.

The shorts in The Wonderful World of Mickey Mouse clock in around seven minutes, which is longer than the format of Mickey Mouse. “We just get a little more elbow room to flesh out our stories, involve more of the cast members, and have a little more play between the characters and their relationships.”

When viewing the new season, audiences should be on the lookout for familiar faces in strange places. “We often have little cameos across the Disney universe. Odd characters that don’t necessarily relate to Minnie and Mickey, but they do because it’s Disney, and we’ll just shoehorn them in like Ursula, the Beast, or Snow White. We’ll work them in as we come up with a joke.”

Should viewers then expect for Star Wars characters in any upcoming episodes? “We probably could at this point … haven’t looked into that yet, but I’d bet it would be on the table.”

Ten episodes of The Wonderful World of Mickey Mouse will premiere in 2020. After its debut on Nov. 18, new episodes will be released every Friday beginning Nov. 27. The rest of the season will be available in 2021.