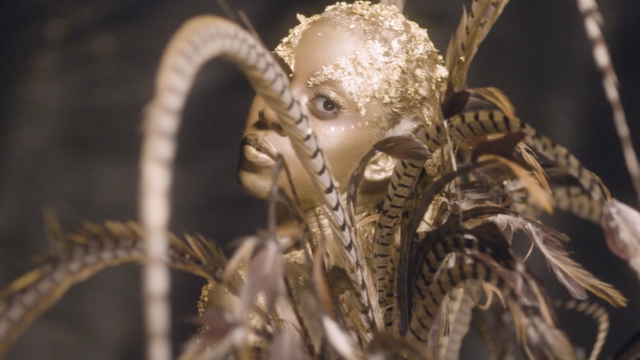 Dola’s mini-documentary, ‘Space Daughter: Behind the Magic,’ is released on Dec. 18.

Singer, Tony Award-nominated actress, and CalArts alum Condola “Dola” Rashad releases Space Daughter: Behind the Magic, a mini-documentary that provides insight into the creative process of her critically acclaimed visual EP, Space Daughter. The documentary will be available for viewing on Friday, Dec. 18 at 6 am PST/9 am EST on the Center for New Performance’s (CNP) website.

Released in July, Space Daughter marked Rashad’s debut as the solo music artist “Dola,” a nickname from her friends and family. The EP’s videos were filmed in the summer of 2019 at her creative home—CalArts—working with CNP.

“There was no better collaboration than Center for New Performance,” Rashad said. “Their mission is creating a space for artists to emerge.” Added CNP Artistic Director/School of Theater Dean Travis Preston, “It also speaks to CNP’s continued investment in our alumni as they continue to reinvent themselves in a dynamic cultural landscape.”

The five-song concept album is focused on the Divine Feminine, and each of the videos reflect some aspect of the theme. Dola co-produced and co-wrote all the tracks with Grammy-nominated producer LordQuest and singer-songwriter Alex Saad, respectively.

Space Daughter: Behind the Magic is directed by Rashad and fellow CalArts alum Nico Savignano (Film/Video MFA 15) and features interviews and off-camera antics from her creative team, including her co-director for the music videos, childhood friend and tap dancer Maud Arnold, and choreographer/movement director Jessica Emmanuel (Dance BFA 06). Look closely and you’ll see a number of familiar spaces throughout CalArts’ campus.

To stream Space Daughter: Behind the Magic, please visit centerfornewperformance.org and Dola’s Youtube channel on Dec. 18.

Related: Read a profile on Condola Rashad in The Pool, CalArts Alumni Magazine.