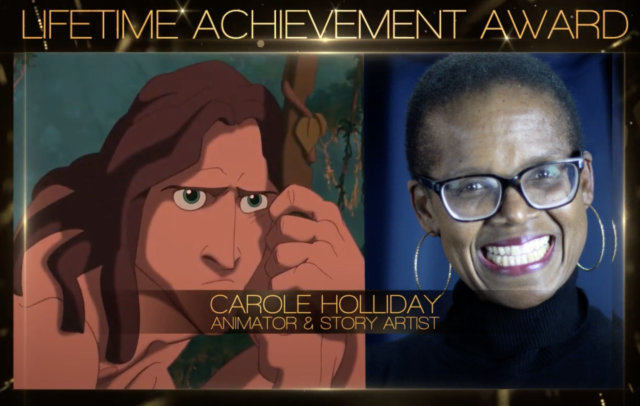 Holliday received the Lifetime Achievement Award for dedicating 20+ years of work in animation and for creating “a legacy of dynamic storytelling.” Holliday initially wanted to sing and act, but discovered her passion for animation, and was able to combine her love of theater and drawing as a storyboard artist. Her credits include several classic Disney animated films such as, Oliver and Company, The Little Mermaid, and Tarzan. On the awards site, Holliday writes, “Storytelling isn’t always an easy task, but it’s so rewarding when it works!”

Smith received the Narrative Creator Award for playing “a significant role in transforming representation in animation,” and for lending his “voice and talent to the advancement of authentic and diverse storytelling,” according to the BIA Awards website. A director, producer, and animator, Smith has been working in the animation industry for more than three decades. He is the creator of the hit Disney Channel series The Proud Family, and its long-anticipated Disney+ revival The Proud Family: Louder and Prouder. Most recently, Smith was one of three directors of the Academy Award-winning short film “Hair Love.” His additional credits include Space Jam, Who Framed Roger Rabbit, and A Goofy Movie, to name a few.

The four other awards were: Trailblazer Award given to Vanessa Morrison, president of streaming at Walt Disney Studios; Cultural Innovator Award given to Dr. Ayoka Chenzira, TV director and experimental filmmaker; Rising Star Award given to Tina Obo, director; and Next Gen Award presented to Latoya Raveneau, director at Disney Television Animation.

The awards show was hosted by British singer, producer, and actor Estelle, and is available to stream in its entirety on YouTube.